ALASKA -- Alaskans and air travelers remained on alert Thursday due to the rumblings of a more than 8,000-foot volcano emitting a "continuous ash, steam and gas cloud" that already extends up to 60 miles away.

The Alaska Volcano Observatory noted Thursday that the Pavlof volcano "continues to erupt," with "fire fountaining" at its summit 8,261 feet above sea level.

A resulting cloud that extends downwind 30 to 60 miles (50 to 100 kilometers) moved southeast on Thursday morning over the Gulf of Alaska. It reaches an altitude of about 20,000 feet above sea level. 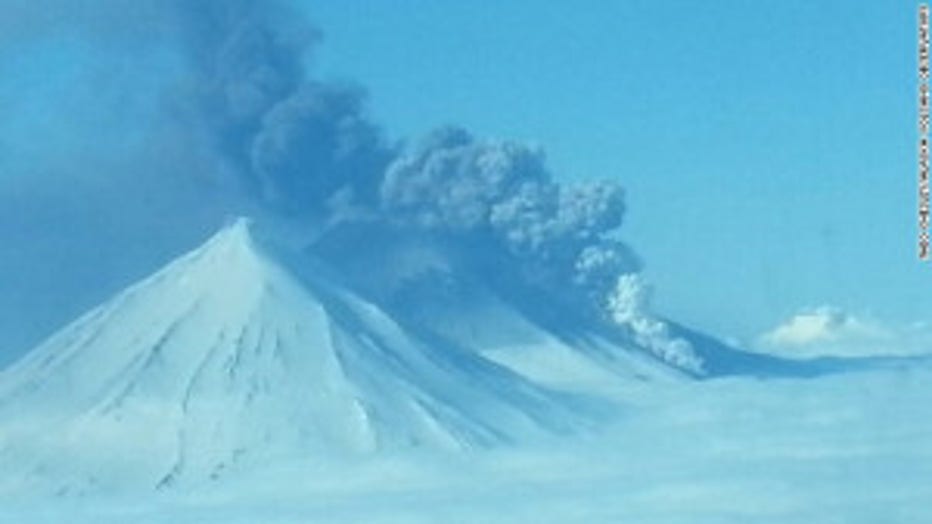 "Satellite images show persistent elevated surface temperatures at the summit and on the northwest flank, commensurate with the summit fire fountaining and resulting lava flow," the observatory said in its Thursday update.

A lava fountain, the U.S. Geological Survey explains, is "a jet of lava sprayed into the air by the rapid formation and expansion of gas bubbles in molten rock." It typically spews lava 10 to 100 meters up, though it sometimes goes as high as 500 meters.

Remote but still connected to the Alaskan mainland, Pavlof is one of two volcanoes -- the other is named Cleveland -- that are on "watch" status due to heightened activity. They're also both under an orange code that relates to how their rumblings might affect planes flying over their summits. Both these alert levels are the second most serious out of four options, according to the Alaska Volcano Observatory.

Less was known Thursday about Cleveland, which is on an island and not monitored with ground instruments like Pavlof.

Two days ago, the observatory reported a 100-meter-wide swath of lavareaching about 1 mile down its southeastern flank. "Cloudy conditions" have made it difficult for satellites, and thus scientists, to assess its status over the last 24 hours.