ANCHORAGE, Alaska (AP) — With sizable shockwaves still emanating from last week's powerful earthquake, authorities in Alaska are urging the selfie-taking public to stay away from a road that was badly mangled.

Some photos posted on social media show people even climbing into large cracks on the buckled road in Wasilla north of Anchorage, Alaska State Trooper spokesman Jonathon Taylor said Tuesday. Signs and barricades have been set up to keep people away from the site, whose ground liquefied from the force of Friday's 7.0 magnitude quake near Anchorage. 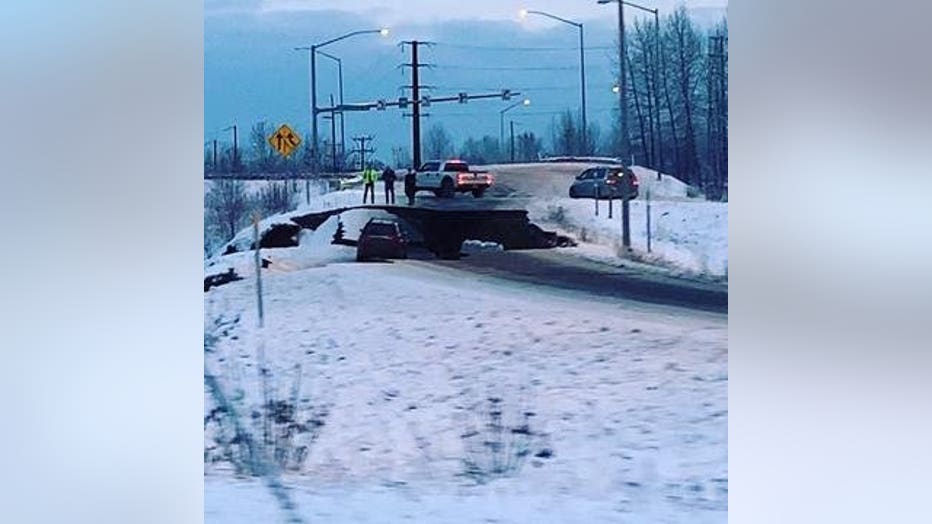 "It looks sort of like shattered pieces of glass, if you will, from above, which makes a very fascinating visual. But it is also unsafe to be there," Taylor said.

Repair crews using heavy equipment have started construction on the stretch of road, and spectators can impede that effort, he said.

Taylor hasn't heard about anyone getting hurt, however. He said just being in the area is extremely unsafe, particularly with scores of aftershocks occurring since the earthquake, which was centered 7 miles (11 kilometers) north of Anchorage.

The 4.6 magnitude temblor was felt in Anchorage. It was the 13th with a magnitude of 4.5 and above since Friday's quake, according to U.S. Geological Survey geophysicist John Bellini.

More than 2,100 aftershocks have occurred since the first earthquake, including a 5.7 shaker that arrived within minutes. The vast majority of the aftershocks are too small to feel, Bellini said.

Friday's earthquake damaged roads and structures, cracked roadways and collapsed highway ramps. But no catastrophic damage, injuries or deaths have been reported.

Alaska Railroad freight trains resumed runs between Anchorage and Fairbanks on Tuesday following repairs to earthquake damage that prevented trains making the trek. The trip is 350 miles (563 kilometers) each way.

Officials say passenger trains will resume service Thursday with a flagstop train run that goes part of the way to Fairbanks, followed by the resumption Saturday of the railroad's regular winter runs.

Schools in Anchorage have been closed until Dec. 10. An elementary school in the Anchorage suburb of Eagle River that been deemed unsafe to occupy will remain closed for the rest of the school year, said Morgan Duclos, a school district spokeswoman.

The American Red Cross said Tuesday it has provided a total 182 overnight stays among four emergency shelters set up in Anchorage and to the north.