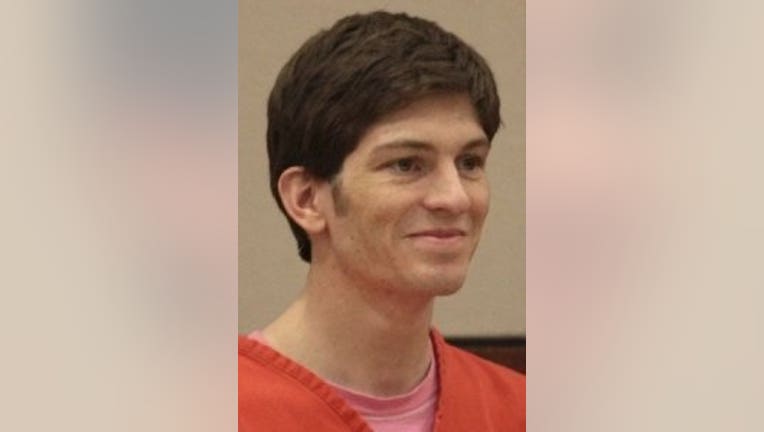 ANCHORAGE, Alaska -- The youthful head of a self-styled Alaska militia that collected firearms and grenades and talked of killing judges and government employees was sentenced Tuesday to more than 25 years in prison, despite his lawyer’s claim that he suffered from paranoid delusions.

Prosecutors had sought 35 years for Schaeffer Cox,   who had gained a following in far-right circles across the West with his message that the government had strayed from its constitutional authority. Secretly  he and his followers began accumulating weaponry and plotting retribution.

Tuesday’s hearing in Anchorage marked a substantial turnaround for the 28-year-old former leader of the Alaska Peacemakers Militia, who spent his trial in May and June denying wrongdoing and accusing the government of putting his political beliefs on trial.

“I love God and I love my country. To be passionate and full of zeal is good, but I was foolish and full of pride. In my foolish pride, I got on my soapbox  to wag my finger at the government for every little thing they did wrong,” Cox said in a letter to supporters that was filed with the court.

In that letter, he insisted the charges against him were “lies” and the case against him was “manufactured.” But in court Tuesday, he appeared to take some responsibility, and his lawyer presented a psychological analysis suggesting that paranoid personality disorders and mental illness had distorted Cox's sense of reality.

Prosecutors have portrayed Cox as a manipulator who lied throughout his trial in an attempt to avoid responsibility for plots that could have led to the deaths of judges, other government employees and innocent bystanders.

“It should be clear to this court that it has before it a manipulative, conning and self-aggrandizing individual with severe sociopathic tendencies. Cox lies easily, and often,” Assistant U.S. Attorney Steven Skrocki wrote in his sentencing memorandum.

“It is abundantly clear that Cox views himself above the law and that he lives by his own set of rules, which he expects others to abide by,” Skrocki said.

Cox was  convicted of conspiracy to murder federal officials and soliciting his co-defendants to do the same, along with a variety of weapons charges.

Evidence at trial, including several recordings of Cox talking with government informants, revealed that he and his co-defendants hatched a “2-4-1” plan to kill two judges or police officers for every one of their militia killed by the authorities.

“What do we do? We kill a whole butt load of them, and then offer peace,” Cox is heard to say in one recording played in court. In another, he named two state court employees who he said “need to dangle together like a wind chime.”

Lonnie Vernon, a militia associate who was convicted on similar charges, was sentenced Monday to a similar 25-year term in a hearing marked by repeated outbursts by the defendant.