MINNEAPOLIS  — Minnesota Sen. Al Franken said he feels "embarrassed and ashamed" amid allegations that he groped several women, but said he looks forward to returning to work on Monday and gradually regaining voters' trust.

Three women allege Franken grabbed their buttocks while taking photos with them during separate incidents at campaign events in 2007, 2008 and 2010. Franken told the Minneapolis Star Tribune he doesn't remember taking the specific photos, but said such groping is "not something I would intentionally do."

Asked whether he expected other women to step forward with similar allegations, Franken said: "If you had asked me two weeks ago, 'Would any woman say I had treated her with disrespect?' I would have said no. So this has just caught me by surprise. ... I certainly hope not."

The first woman to come forward was Los Angeles radio news anchor Leeann Tweeden. She released a photo earlier this month showing the then-comedian grinning while reaching out toward her chest, as if to grope her, as she slept on a military aircraft during a USO tour in 2006.

Franken told Minnesota Public Radio on Sunday the photo was "inexcusable." He declined to explain it further.

"What my intention was doesn't matter. What matters is that I am chained to that photo," Franken said. "She ... didn't have any ability to consent. She had every right to feel violated by that photo. I have apologized to her, and I was very grateful that she accepted my apology." 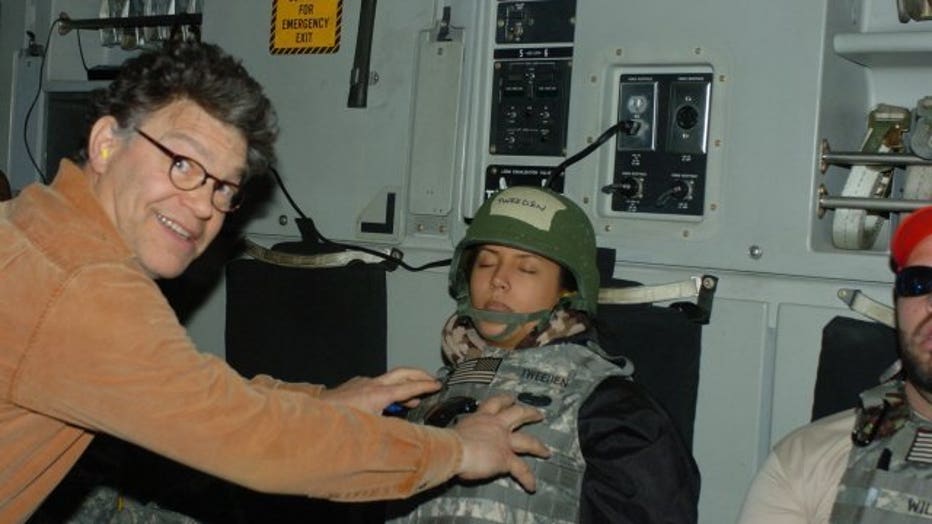 Tweeden said Franken also forcibly kissed her while rehearsing for a USO performance; Franken has said he has a different recollection of the rehearsal.

Franken faces a Senate ethics investigation — which he welcomed in the wake of Tweeden's allegation — though it's unclear when that review may begin. Franken, who hasn't faced widespread calls to resign, said he will fully cooperate.

Franken missed votes after the first accusations were made public. He said he spent the holiday break with his wife and the rest of his supportive family. When he goes back to work Monday, he said he'll ask tough questions about proposed tax legislation that "would affect Minnesota and the rest of the country in a terrible way."

Franken sidestepped when asked whether the allegations would make him less effective in the Senate. He noted he has apologized to women who have felt disrespected and "to everyone I have let down."

"I think this will take some time," he told Minnesota Public Radio. "I am trying to handle this in a way that adds to an important conversation. And to be a better public servant and a better man. That is what my goal is."

Franken came to the Senate after a months-long recount gave him a 312-vote victory in his 2008 election. He immediately tried to distance himself from his decades of professional comedy, which included raunchy writing and off-color jokes. He also avoided national reporters.