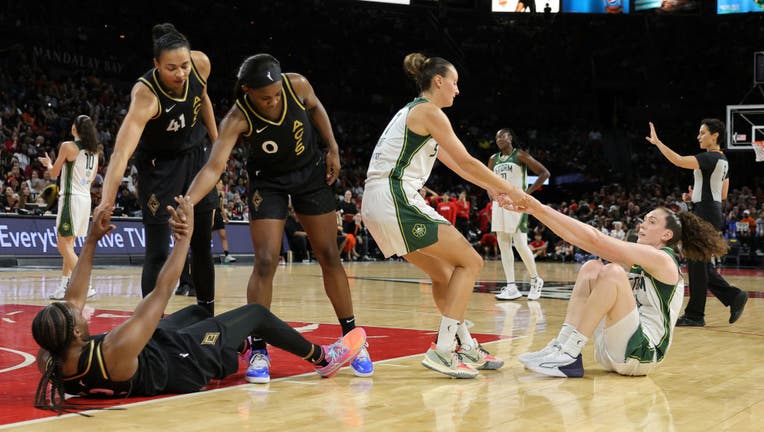 LAS VEGAS - A’ja Wilson didn’t like the feeling after a Game 1 loss of the semifinals in the WNBA playoffs, scoring just eight points.

She responded with a career playoff-high 33 points and grabbed 12 rebounds to help the Las Vegas Aces beat the Seattle Storm 78-73 in Game 2 on Wednesday night and even the series.

"When I saw the game getting down to the wire I was like, ‘Well, we’re not going to let this happen again,’ I learned my lesson," Wilson said. "So I don’t necessarily know if it’s possessed, but I just really was locked in for my team. I needed to be the anchor that I was before and being consistent into what got us here."

Game 3 is Sunday in Seattle.

"At end of the day we knew what we had to do. We had to take care of home," Wilson said. "We should have lost by more in Game 1. We went back to film room and got into the lab."

Seattle battled back behind Breanna Stewart, who led the Storm with 32 points and seven rebounds. The Storm got within 75-73 on Sue Bird’s runner in the lane that she banked in with 19.9 seconds left.

"I was just locked in. Had to be locked in for my team," Wilson said. "Can’t be like who I was before."

Wilson took over in the second half of Game 2. With the game tied heading into the third quarter, she scored 13 points in the period to help the Aces take a 60-52 lead.

"I don’t even remember the third quarter because I was just that locked in because I need to be that for my team," Wilson said.

Though the Storm were a perfect 11 for 11 from the free-throw line, coach Noelle Quinn expressed disappointment her players didn’t get as many calls as the Aces, who hit 18 of 23 free-throw attempts.

"I thought that our posts were doing an excellent job of getting into the paint," she said. "I thought they were doing everything right, except for getting to the free-throw line and getting the calls."

The Aces came out of the chute an entirely different team from the one that looked stagnant in the first quarter of Game 1, taking a 14-11 lead midway through. But after making 7 of 13 to start the game, the Aces missed their last five shots in the quarter. The Storm, however, used a 10-0 run to close the period and took a 23-16 lead into the second.

The second quarter quickly turned into a battle of MVP candidates, as Stewart scored Seattle’s first six points of the second quarter, while Wilson scored eight of Las Vegas’ first 13. The Aces used an 11-2 run to tie the game at 31. The teams went into halftime knotted at 36.

"We had a lot of a lot of opportunities to kind of get the game back on our side and take momentum," Stewart said. "We knew that they were going to come out guns blazing. They had to, they don’t want to go down 0-2. But we’re going to continue to learn from this game. We’re going home and look forward to really playing back in front of our fans."