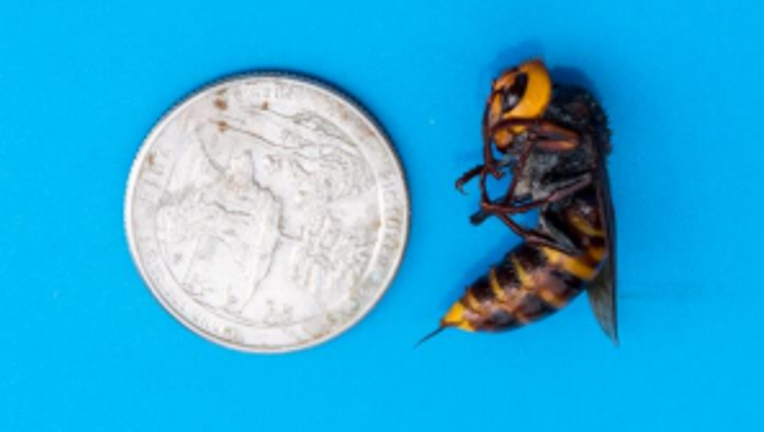 BIRCH BAY, Wash. - One dead Asian giant hornet has been captured in a trap near Birch Bay, and another was spotted by local diners at a nearby restaurant, according to the Washington State Department of Agriculture.

Agriculture officials say a worker hornet is slightly smaller, comparative to the 1.5-2 inches of a typical Asian giant hornet.

Officials say the other hornet spotted was spotted flying over diners sitting outside at a Birch Bay Dr. restaurant, who reported the sighting to WSDA. That hornet was not captured.

Researchers have since set up more traps where the Aug. 19 hornet was found where they intend to catch live Asian giant hornets.

WSDA Pest Program continues to work with the University of Washington to test out radio tags to track live hornets back to their nests. The first trials ran in the Spring, but researchers have yet to capture any potential queen hornets.

As of July, about 600 traps to catch invasive Asian giant hornets were placed in Northwestern Washington’s Whatcom County by WSDA, more than doubling the number already set out by citizens.

Officials are asking anyone who sees any hornets to report them to the WSDA  via email at hornets@agr.wa.gov or call the Asian giant hornet hotline at 1-800-443-6684.