IMPERIAL BEACH, Calif. — During a beach cleanup on Saturday on a part of beach that borders Tijuana, Mexico, a U.S. Border Patrol agent threatened to arrest a journalist, and admonished several people for being too close to the border wall.

The agent drove down a sandy hill quickly and circled around and jumped out of his vehicle and said: “You want to get arrested? You’re about to be arrested right now.” He then grabbed for a pair of handcuffs and came toward the reporter who was questioning why they couldn’t be in that area.

A volunteer, Abi, who wished that her last name not be used, asked the agent why they couldn’t be there. “There is trash right there. We could be picking it up,” Abi told him.

“I know it but the thing is it’s dangerous. You could get rock or something happens,” the agent responded.

When asked by the reporter why we can’t speak to the people gathering at the wall on the other side, the agent said: “No. You have to be north right here.” And then he got back in his vehicle and sat there blocking access to the wall.

Within moments there were additional backup agents stationed on the bluff looking out over the Pacific Ocean, including ATV units. 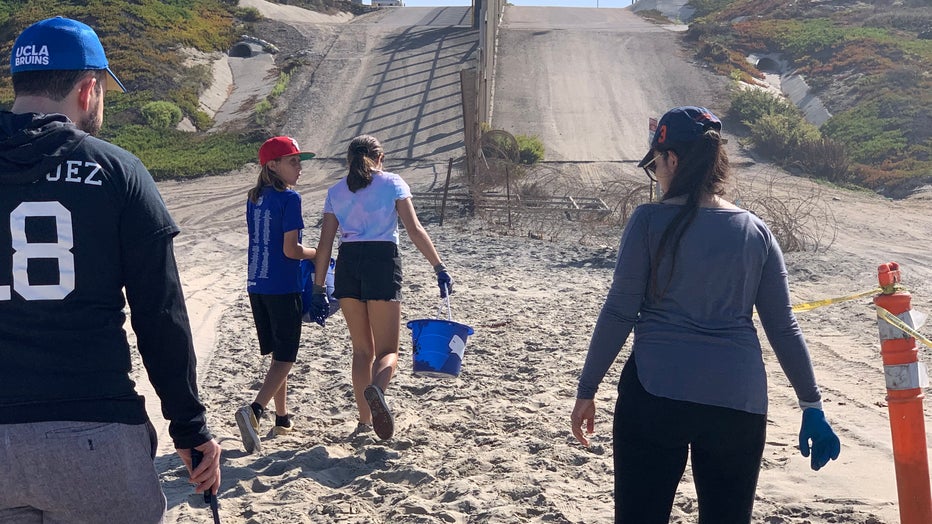 Volunteers picking up trash on Saturday, Sept. 21, 2019, at Imperial Beach, California got too close to an enforcement zone near the border wall. (Border Report Photo/Sandra Sanchez).

The volunteers were among a group of about 100 volunteers who participated at Imperial Beach as part of International Coastal Cleanup Day.

U.S. Border Patrol Agents Justin Castregon explained on Monday that the beach enforcement zone extends from the primary border wall to the secondary, lighter gray wall. The cones on the beach are meant to extend that enforcement zone and passersby are not allowed to wander in there.

“Generally right here in this area we require that people stay just north of those cones on the beach,” Castregon said. “Once you start getting close to the primary wall you are approaching government property. “

Castregon added that “people could be subject to arrest if they don’t listen to our request.”

You can hear Castregon’s full response in the video below:

Signage indicating no trespassing is atop a hill, and that is because the Border Fields State Park, where the beach is located “does not allow signage to be placed in the sand.”

He added that if someone does wander into the area, “an agent will ask them ‘Hey will you please step north. You are approaching an international boundary.'”

Sandra Sanchez can be reached at SSanchez@BorderReport.com. She is reporting as part of a Border Tour through the Southwest, which departs today from San Diego and will travel to Brownsville, Texas.