Joe Biden discusses Afghanistan mission to save Americans and allies

President Biden addressed the bid to evacuate American citizens and Afghan allies from Afghanistan in the face of the Taliban takeover of the country, as he faces a torrent of criticism for his handling of the U.S. withdrawal.

KABUL, Afghanistan (AP) - Potential Islamic State threats against Americans in Afghanistan are forcing the U.S. military to develop new ways to get evacuees to the airport in Kabul, a senior U.S. official said Saturday, adding a new complication to the already chaotic efforts to get people out of the country after its swift fall to the Taliban.

The official said that small groups of Americans and possibly other civilians will be given specific instructions on what to do, including movement to transit points where they can be gathered up by the military. The official spoke on condition of anonymity to discuss military operations.

The changes come as the U.S. Embassy issued a new security warning Saturday telling citizens not to travel to the Kabul airport without individual instruction from a U.S. government representative. Officials declined to provide more specifics about the IS threat but described it as significant. They said there have beenno confirmed attacks as yet.

RELATED: Biden vows to get all Americans home amid chaotic Afghanistan evacuation

Time is running out ahead of President Joe Biden’s Aug. 31 deadline to withdraw most remaining U.S. troops. In his remarks on the situation Friday, he did not commit to extending it, though he did issue a new pledge to evacuate not only all Americans in Afghanistan, but also the tens of thousands of Afghans who have aided the war effort since Sept. 11, 2001. That promise would dramatically expand the number of people the U.S. evacuates.

Biden faces growing criticism as videos depict pandemonium and occasional violence outside the airport, and as vulnerable Afghans who fear the Taliban's retaliation send desperate pleas not to be left behind.

The Islamic State group — which has long declared a desire to attack America and U.S. interests abroad — has been active in Afghanistan for a number of years, carrying out waves of horrific attacks, mostly on the Shiite minority. The group has been repeatedly targeted by U.S. airstrikes in recent years, as well as Taliban attacks. But officials say fragments of the group are still active in Afghanistan, and the U.S. is concerned about it reconstituting in a larger way as the country comes under divisive Taliban rule.

Meanwhile, the Taliban's top political leader arrived in Kabul for talks on forming a new government. The presence of Mullah Abdul Ghani Baradar, who returned to Kandahar earlier this week from Qatar, was confirmed by a Taliban official who spoke on condition of anonymity because he was not authorized to talk to the news media. Baradar negotiated the religious movement’s 2020 peace deal with the U.S., and he is now expected to play a key role in negotiations between the Taliban and officials from the Afghan government that the militant group deposed.

Afghan officials familiar with talks held in the capital say the Taliban have said they will not make announcements on their government until the Aug. 31 deadline for the troop withdrawal passes.

Abdullah Abdullah, a senior official in the ousted government, tweeted that he and ex-President Hamid Karzai met Saturday with Taliban’s acting governor for Kabul, who "assured us that he would do everything possible for the security of the people" of the city. 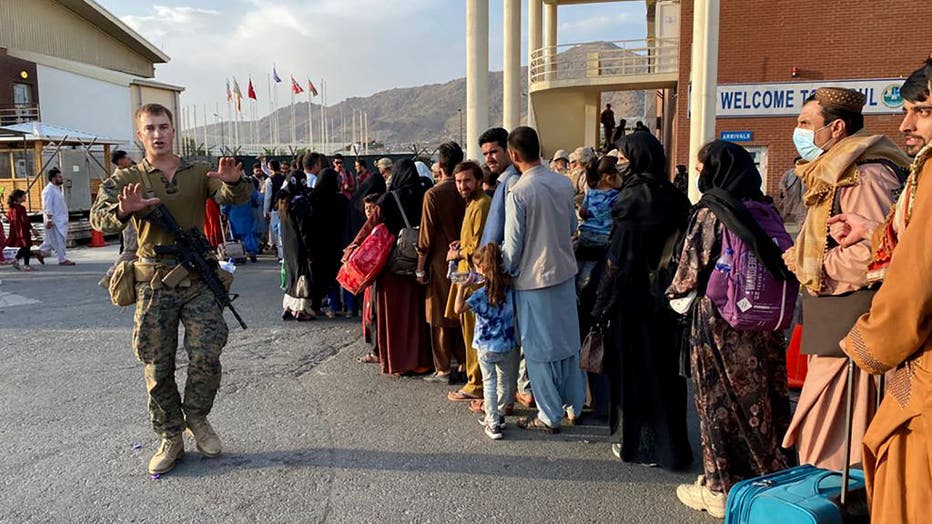 Afghan people queue up to board a U S military aircraft to leave Afghanistan, at the military airport in Kabul on August 19, 2021 after Taliban's military takeover of Afghanistan. (Photo by SHAKIB RAHMANI/AFP via Getty Images)

Evacuations continued, though some outgoing flights were far from full because of the airport chaos. The German military said in a tweet that one plane left Kabul on Saturday with 205 evacuees, while a second aircraft carried only 20. The Italian Defense Ministry announced the evacuation Saturday of 211 Afghans, which it said brought to 2,100 the number of Afghan workers at Italian missions and their families who have been safely evacuated.

On Friday, British Prime Minister Boris Johnson said around 1,000 people a day were being evacuated amid a "stabilization" at the airport. But on Saturday, a former Royal Marine-turned charity director in Afghanistan said the situation was getting worse, not better.

"We can’t leave the country because we can’t get into the airport without putting our lives at risk," Paul Farthing told BBC radio.

RELATED: How to help Afghan refugees: Ways to support those impacted by Taliban takeover

Army Maj. Gen. Hank Taylor, Joint Staff deputy director for regional operations, told Pentagon reporters Saturday that the U.S. has evacuated 17,000 people through the Kabul airport since Aug. 15. About 2,500 have been Americans, he said. U.S. officials have estimated there are as many as 15,000 Americans in Afghanistan, but acknowledge they don’t have solid numbers. In the past day, about 3,800 civilians were evacuated from Afghanistan through a combination of U.S. military and charter flights, Taylor said. Three flights of Afghan evacuees have arrived at Dulles International Airport outside Washington, D.C.

The evacuations have been hampered by screening and logistical strains at way stations such as al-Udeid Air Base in Qatar. U.S. officials said they have limited numbers of screeners, and they are struggling to work through glitches in the vetting systems.

Taylor said that the Kabul airport remains open, and that Americans continue to be processed if they get to the gates, but he and Pentagon spokesman John Kirby said the threat picture changes by the hour.

"We know that we’re fighting against both time and space," Kirby said. "That’s the race we’re in right now."

So far, 13 countries have agreed to host at-risk Afghans at least temporarily, U.S. Secretary of State Antony Blinken said. Another 12 have agreed to serve as transit points for evacuees, including Americans and others.

"We are tired. We are happy. We are now in a safe country," one Afghan man said upon arrival in Italy with 79 fellow citizens, speaking in a video distributed by that country's defense ministry.

But the growing question for many other Afghans is, where will they finally call home? Already, European leaders who fear a repeat of the 2015 migration crisis are signaling that fleeing Afghans who didn’t help Western forces during the war should stay in neighboring countries instead.

Remaining in Afghanistan means adapting to life under the Taliban, who say they seek an "inclusive, Islamic" government, will offer full amnesty to those who worked for the U.S. and the Western-backed government and have become more moderate since they last held power from 1996 to 2001. They also have said — without elaborating — that they will honor women’s rights within the norms of Islamic law.

But many Afghans fear a return to the Taliban’s harsh rule in the late 1990s, when the group barred women from attending school or working outside the home, banned television and music, chopped off the hands of suspected thieves and held public executions.

"Today, some of my friends went to work at the court and the Taliban didn't let them into their offices. They showed their guns and said, ‘You’re not eligible to work in this government if you worked in the past one,'" one women's activist in Kabul told The Associated Press on Saturday. She spoke on condition of anonymity for fear of retaliation.

With a Turkish visa but no way to safely reach the airport, the activist described the gap between the Taliban's words and actions "very alarming."