SAN DIEGO (AP) — The Trump administration said Thursday that more than 1,800 children separated at the U.S.-Mexico border have been reunited with parents and sponsors but hundreds remain apart, signaling a potentially arduous task ahead as it deals with the fallout of its "zero tolerance" policy on people entering the U.S. illegally.

There have been 1,442 children 5 and older reunified with their parents in U.S. Immigration and Customs Enforcement custody and 378 others who were released "in other appropriate circumstances," including to other sponsors, the Justice Department said in a court filing.

Still, more than 700 parents were deemed not eligible or currently not eligible, many of whom may have been deported. Of those, 431 children have parents outside the United States.

More than 2,500 children were separated from their parents at the border in the past several months amid a zero tolerance policy that criminally prosecuted anyone caught crossing illegally. 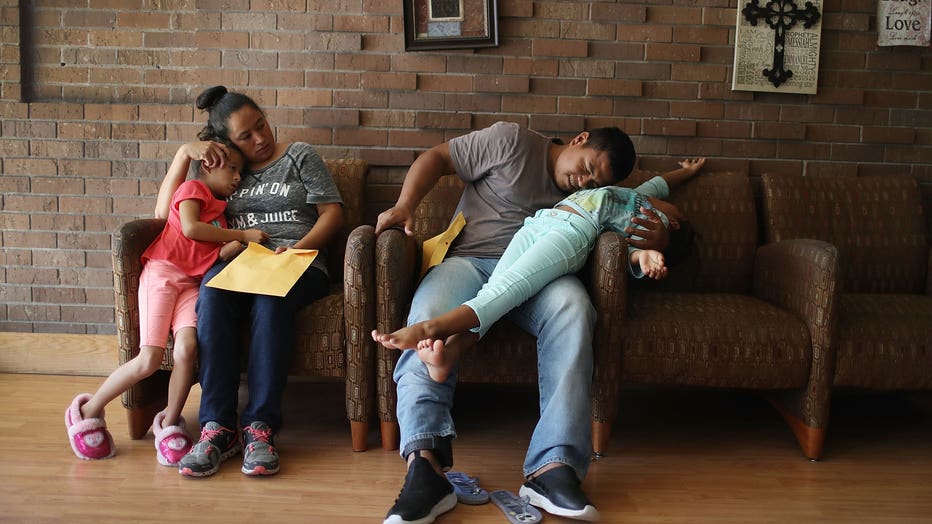 Some children who had not seen their parents in weeks or months seemed slow to accept that they would not be abandoned again. One father who was reunited last week said his young daughter did not believe that he would not leave her a second time.

"I think that some of the children very quickly attach. Others, there's a distance. There's this caution, this lack of certitude, and part of it is not understanding what happened," said Ruben Garcia, director of the Annunciation House, an immigrant-assistance center in El Paso that has received about 25 families each day this week.

Lee Gelernt, an attorney for the American Civil Liberties Union who represents the separated families, said before the latest figures were announced that the government should not be congratulating itself for meeting its "self-defined" deadline.

"The government shouldn't be proud of the work they're doing on reunification," he said. "It should just be, 'We created this cruel, inhumane policy ... now we're trying to fix it in every way we can and make these families whole."

The Department of Homeland Security's internal watchdog said it would review the separation of families, along with the conditions at Border Protection facilities where migrant children are held, in response to scores of congressional requests to do so.

For the last two weeks, children have been arriving steadily at ICE locations in Texas, Arizona and New Mexico to be reunited with parents. Faith-based and other groups have provided meals, clothing, legal advice and plane and bus tickets. The families are generally released, and parents are typically given ankle-monitoring bracelets and court dates to appear before an immigration judge.

But confusion and fear lingers. Jose Dolores Munoz, 36, from El Salvador, was reunited with his 7-year-old daughter last Friday, nearly two months after they were separated. His daughter cries when he leaves the house because she thinks he's not coming back.

"She is afraid," Munoz said in Spanish. "Yesterday I left her crying, she is telling me, 'You are not coming back. You are lying. You are leaving me.'"

"It is the reality of a policy that was in place that resulted in large numbers of families being separated without forethought as to reunification and keeping track of people," said Sabraw, an appointee of Republican President George W. Bush.

Lourdes de Leon, who turned herself in to immigration authorities, was deported to her native Guatemala on June 7 but her 6-year-old son, Leo, remained in the U.S.

De Leon said Guatemalan consular officials told her signing a deportation order would be the easiest way to reunite with Leo.

"He is in a shelter in New York," de Leon said. "My baby already had his hearing with a judge who signed his deportation eight days ago. But I still do not know when they are going to return him to me."

"I think it's going to be really hard detective work," he said. "And hopefully we're going to find them."

Both sides were due back in court Friday, when the judge was going to decide whether to ban deportations of families for seven days after they are reunified so that parents could have time to discuss their options.

Late last month, Sabraw ordered a nationwide halt to family separations, which President Donald Trump effectively did on his own June 20 following an international outcry. Sabraw issued a 14- day deadline to reunite children under 5 with their parents and 30 days for children 5 and older.

On Friday, family attorneys would begin turning their attention to those who weren't reunited — parents who had a criminal record, parents who were no longer in the U.S. and children who were handed over to other sponsors, Gelernt said.