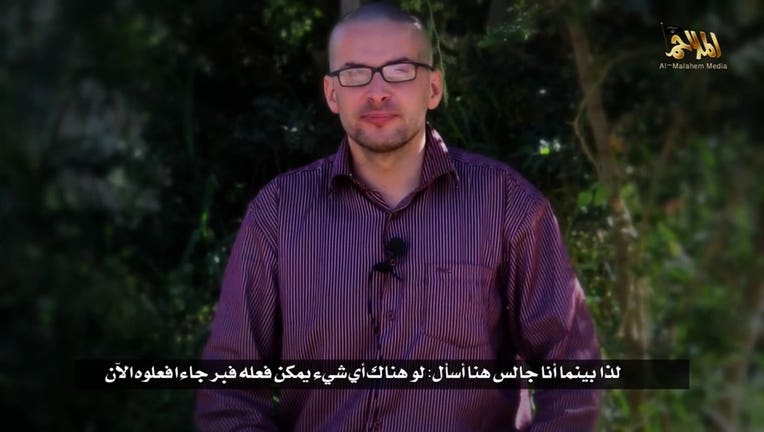 Luke Somers appeared in a video released by al Qaeda in the Arabian Peninsula, or AQAP, on Dec. 4, 2014. Somers is a photojournalist who was captured in September, 2013.(Image from Al-Malahem Media/CNN)

WASHINGTON, D.C. -- Actor James Franco is asking fans to help petition the White House to do more to free a man with ties to Washington State being held in Yemen by al Qaeda.

Franco tweeted out a link to a White House petition asking that the the U.S. 'use its resources to secure the immediate release of Luke Somers, an American photojournalist, from his al-Qaeda hosts.'

In a recording recently posted by al Qaeda in the Arabian Peninsula, also known as AQAP, the terror group threatens to kill Somers, if Washington, D.C. does not meet its demands.

AQAP member Nasser bin Ali al-Ansi, who reads a statement, does not say what the demands are but claims that the U.S. government knows them.

Somers also gives a short statement asking for help and identifying himself.

"My name is Luke Somers. I'm 33 years old. I was born in England, but I carry American citizenship and have lived in America for most of my life," he says.

Somers is a photojournalist from Washington with family in the Lakebay area.

He fell into the hands of kidnappers in September last year. Somers missed being saved in a raid last week by U.S. and Yemini special forces that freed eight hostages.

The raid was planned after al Qaeda militants were spotted transferring the hostages into pickups, "chained and covered in blankets," according to a website associated with Yemen's defense ministry.

Militants drove them to a cave over 65 miles away from the town of Hajir al-Saiyer.

U.S. and Yemeni special forces outfitted with night visors embarked on the mission about four miles from the cave. They encountered the kidnappers nearby; a gun battle ensued, and the forces killed all seven abductors.

They also freed eight chained up hostages, who told them that militants had moved five more hostages, including Somers, to another location.

The Yemeni account did not mention the U.S. Special Forces, but a U.S. official confirmed their participation. CNN, at the request of the government, delayed reporting the information about the raid, so as not to endanger the search for Somers and the other hostages at that time.