Benedict Cumberbatch, well-known for his roles as Stephen Strange in Marvel’s "Doctor Strange" and Sherlock Holmes in the wildly popular TV series "Sherlock Holmes," said he hopes to house Ukrainian refugees amid Russia’s invasion, according to multiple reports.

"It is a really shocking time to be a European two and a half hours flight away from Ukraine, and it's something that hangs over us," Cumberbatch told Sky News, according to Reuters.

"We all need ... to do more than wear a badge. We need to donate, we need to pressure our politicians to continue to create some kind of a refugee safety and a haven here for people who are suffering," Cumberbatch told Sky News.

"Everyone needs to do as much as they can ... there's been a record number of people volunteering to take people into their homes, I hope to be part of that myself," he added.

RELATED: 'We're not done': Mila Kunis and Ashton Kutcher raise over $20M for Ukraine in a week

Britain’s government announced it will pay a monetary reward to people who offer their homes as a refuge to Ukrainians fleeing the Russian invasion. Officials said Sunday the "Homes for Ukraine" program, to be introduced this week, will see sponsors receive a government payment of 350 pounds ($456) per month.

Cumberbatch has actively voiced his support for Ukraine since Russia’s invasion. The Marvel superhero pleaded with supporters in late February while being awarded a star on the Hollywood Walk of Fame to have more than just thoughts and prayers. 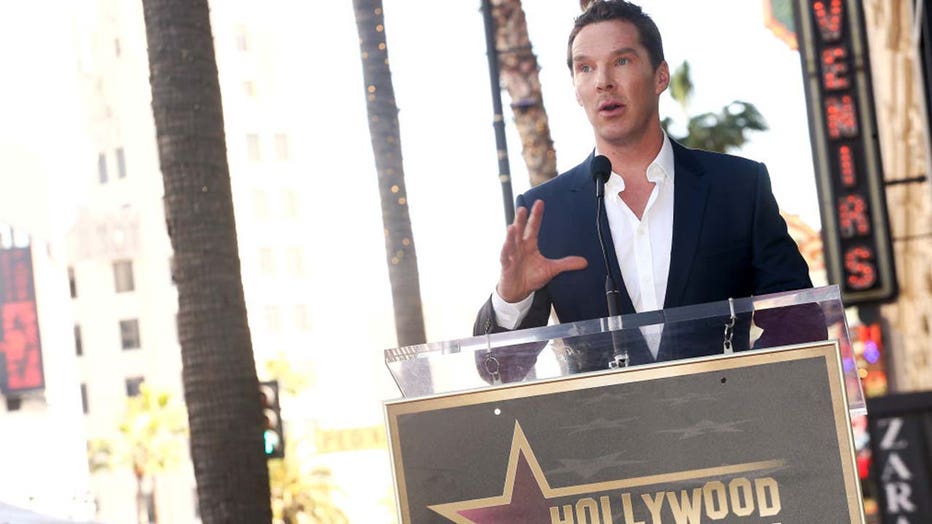 "I can’t speak today, at this very proud moment of my life, on this extraordinary platform, without acknowledging the obvious of what is happening in Ukraine and to show my support for the people of Ukraine, and my support for the people of Russia who are opposing the kleptocracy and the idiocy of their rulers to try and halt the progression of this atrocity," Cumberbatch told a group of reporters.

"There’s more for all of us to do than to just have thoughts and prayers, we need to act," he added.

"We need to go onto embassy websites. We need to see what we can do as citizens of the world, citizens of Europe… for this horrendous moment," the actor continued.

Cumberbatch also held up the Ukrainian flag during the Santa Barbara International Film Festival on March 9 to further show his support of the embattled country. 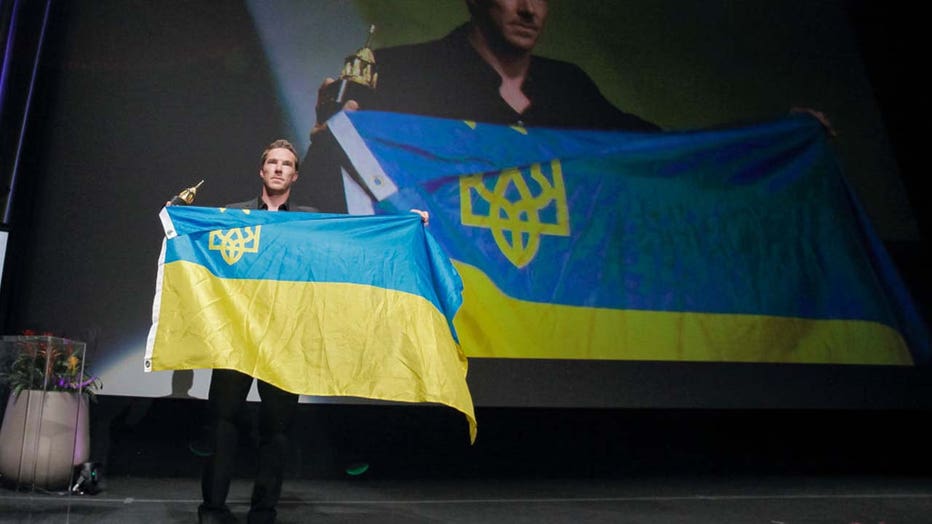 FILE - Benedict Cumberbatch holds up a Ukrainian flag in support of the people of Ukraine at the Cinema Vanguard Award ceremony during the 37th Annual Santa Barbara International Film Festival at Arlington Theatre on March 9, 2022 in Santa Barbara, C (Tibrina Hobson/Getty Images for SBIFF)

Meanwhile, the war has forced more than 2.8 million people to flee Ukraine and the refugees’ harrowing accounts of destruction and death are evidence of the continued suffering of civilians in Ukrainian cities besieged by Russian forces.

At the train station in Przemysl, Poland, refugees described traveling in packed trains and "people sleeping on each other" during their journeys to safety. Some heard explosions as they passed through a western region of Ukraine near Lviv in the area where Russian missiles pounded a military training base, killing at least 35 people.

More than 1.5 million refugees have arrived in Poland since the start of Russia’s invasion of Ukraine on Feb. 24 — out of a total of around 2.7 million people that the United Nations say have fled so far.

Polish border guard spokeswoman Anna Michalska said that the numbers of refugees arriving have eased in the past week with about 79,800 arriving on Saturday, compared to 142,000 a week earlier. In Romania, 29,636 refugees arrived on March 7, with the number dropping to 16,676 on Saturday.

Still, the refugees said their escape to safety was as hard as ever.

Most of the refugees fleeing Ukraine have been women and children because men from 18-60 have stayed behind to fight and are forbidden from leaving the country. Many already have moved to other countries in Europe, mostly to stay with friends and family there.

The U.N. has recorded at least 596 civilian deaths, though it believes the true toll is much higher. Ukraine’s Prosecutor General’s office said that at least 85 children are among the dead.

The Associated Press and FOX News contributed to this report. This story was reported out of Los Angeles.