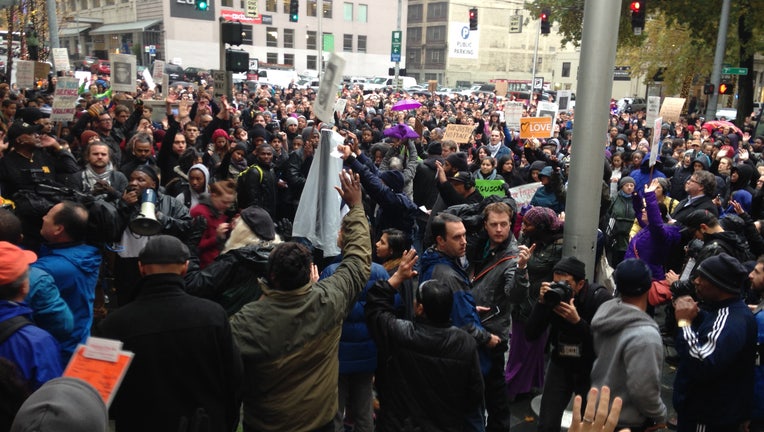 SEATTLE -- A large group of protesters are expected to meet at Westlake Plaza on Monday evening to stand against what they call police brutality and injustice.

This evening's planned protest will begin at 6 pm and could last into Tuesday morning. Protesters are asking people to bring signs and bring friends.

Rev. Jesse Jackson is also in Seattle for an event and said he would like to see the President of the United States do something.

Rev. Jackson said, “This has finally hit the breaking point, the tipping point in Ferguson. I hope President Barack Obama will go to Ferguson and define the crisis and the remedy in what happened in the report.”

Jackson spoke to dozens of protesters in Portland over the weekend.

In Seattle, protests lead to the vandalism of a police van and a exotic car dealership over the weekend.

Activists call on others to walk out Monday across the country


Activists were calling for students to walk out of school and employees to walk off the job nationwide Monday to protest police violence.

Organizers said at least 60 such events were planned around the country, mostly at colleges and universities, according to a website listing the protests.

At the University of Nevada-Las Vegas, protesters planned a die-in at the student union, while demonstrators in Illinois were asking students and employees along the Chicago Loop to walk out of school and work together, to name a few of the planned demonstrations.

In solidarity with Ferguson, Missouri, most of the protests were planned at 12:01 p.m. CT, the time Michael Brown was shot.

Over the Thanksgiving weekend, Ferguson-area organizers called for a Black Friday shopping boycott, forcing the St. Louis Galleria Mall to shut down temporarily on the busiest shopping day of the year.

Protesters chanted, "Hands up, don't shop," while others lay on the floor in a "die-in."

If supporters did shop, they were told to take their money to black-owned businesses, some of which were listed on social media. Brown, the teenager, was black; Officer Darren Wilson, who shot him, is white.