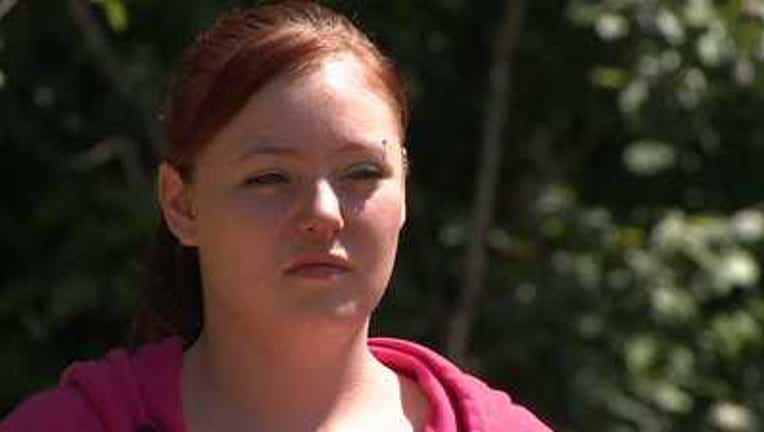 Amber Wright tries to enjoy the simple things in life now, like taking a walk outside and spending time in her garden because not so long ago, Amber’s life was far from simple.

“I didn’t have much of a childhood, to be honest. I would get punched in the face. He would make me do stuff to him, touch him in inappropriate places,” said Amber.

When she was just 13 years old, after her parent’s divorce, Amber’s father, David Wright, did the unthinkable to his own daughter.

“He would get high and have me do it (get high) too with him. Meth was one of them, coke and heroin,” said Amber.

“This is a man who would invite young teen girls into the home to play strip poker,” said Amber’s attorney, David Moody. “He would shoot them up with drugs, give them alcohol and invite them to take showers with him.”

The Sumner Police Department began investigating in July 2004.  Detectives interviewed girls as young as 6 who reported that Wright sexually molested them. At the same time, the state Department of Social and Health Services got involved and took Amber out of the home.

“The problem is they placed her with the abuser’s mother. She then did everything she could to get Amber to recant and say she wasn’t being abused,” said Moody.

One month later, Sumner police arrested Wright for child molestation after eight girls gave statements to police that he had either abused them or witnessed him taking illegal drugs and molesting his daughter.

Wright bailed out of jail and immediately asked DSHS to see his kids. That would be up to Bruce Morrison, the social worker assigned to Amber’s case.

“He simply, after doing virtually no investigation whatsoever, placed Amber right back into the same home where she continued to be drugged and raped,” said Moody.

In October 2004, Morrison closed the case as “unfounded.” He met with Amber twice and interviewed her only when Wright’s mother was with her. Amber was too scared to talk about the abuse, so Morrison allowed Wright to move back in with his daughter. For the next seven months, he physically and sexually abused her nearly every day.

“They would have found out everything about the drug abuse, him doing things to me and beating me. It was all in black and white, it was all there,” said Amber.

In December 2005, Wright was charged with 14 counts of incest, molestation and rape and sentenced to three and a half years in prison. During that time, Amber decided to sue DSHS.

The case dragged on, and in 2010 during a court deposition, Morrison admitted on the stand he didn’t know what he was doing.

“So you never interviewed Amber about being sexually abused, right?” asked Moody in court.

“Not even once?” asked Moody.

“Not once,” said Morrison.

“During the 2004 investigation that you conducted, did you read the victim statements about other young girls being fed drugs?” asked Moody.

Morrison also had the authority to request David Wright undergo a psycho-sexual evaluation, but didn’t.

“In 2004 do you believe you were qualified to investigate allegations of sexual abuse concerning a child?” asked Moody in court.

Q13 FOX News sat down with DSHS Assistant Secretary Denise Revels-Robinson to ask her what she thought about a social worker admitting they weren’t qualified to investigate a case like that.

“When you hear one of your employees feels that way, how concerning is that for you?” she was asked.

“I think it’s always concerning, because if the person feels that way, it probably is true. And,  clearly, then it says to me, did the child get the best we could have given them?” said Revels-Robinson.

Michelle Bossard, Amber’s adoptive mom, is still outraged about the way the case was handled.

“How could he not be qualified as a social worker to investigate an abuse and neglect case with children? That’s his job on a daily basis and he sits there and says I’m not qualified. How does that happen?” asked Bossard.

In May 2012, DSHS settled with Amber for $2.5 million. Her days are spent focusing on healing emotionally, trying to take care of herself after she feels no one took care of her for so long. Her greatest fear is that the state agency meant to protect kids is failing other victims.

“They’re the biggest agency out there and that’s their job to do this. There are so many people out there in the same situation I am and they’re not getting help and they’re suffering,” said Amber.

In addition to her settlement, a judge ordered DSHS to pay Amber a record $650,000 for violating the state’s Freedom of Information Act. When investigating her case, Amber’s attorney asked for his client’s entire file, and a judge found DSHS removed documents, specifically the recorded statement Amber gave to police about her father’s abuse.

Moreover, when Wright was eventually released from prison, the state Department of Corrections never notified Amber he was out, even though he had moved within 20 miles of her home in Elma.