SEATTLE -- More than a quarter of a million people lost power Thursday as a strong wind storm pushed through western Washington.

Trees were falling on homes and power lines, leading to blocked roads and the widespread power outages. No serious injuries had been reported.

A high wind warning remains in effect for much of area into Thursday evening, with gusts up to 60 miles an hour already recorded.

The National Weather Service says a gust of 117 mph was reported from Mount Baker while a 72 mph gust was reported on Hurricane Ridge on the Olympic Peninsula.

The Washington Department of Transportation reported that power lines were fully blocking southbound Interstate 5 near Burlington.

While power has been restored in some areas, tens of thousands remained without electricity as of Thursday evening. As of 11:25 p.m., the power outages include:

Washington State Patrol Trooper Chelsea Hodgson said on Twitter that a trampoline was trapped between power lines around Grays Harbor. (Click through the photo gallery below for images)

Wind in Bellingham ripped part of the exterior from a clock tower while over in Discovery Bay an 80-foot sailboat was blown aground.

Video provided to Q13 News by Jason Higgins and John Galen showed flooding at the Bay Breeze restaurant in Birch Bay.  Other photos showed more damage along Birch Bay Drive (See photos in the above gallery).

Schools in Winlock shut down due to a power outage and all afternoon preschool classes were canceled.

The Hood Canal Bridge closed at 11:00 a.m. due to high winds and water blowing over the bridge.

There's a high wind warning in effect for much of area into Thursday evening, with gusts up to 60 miles an hour possible. 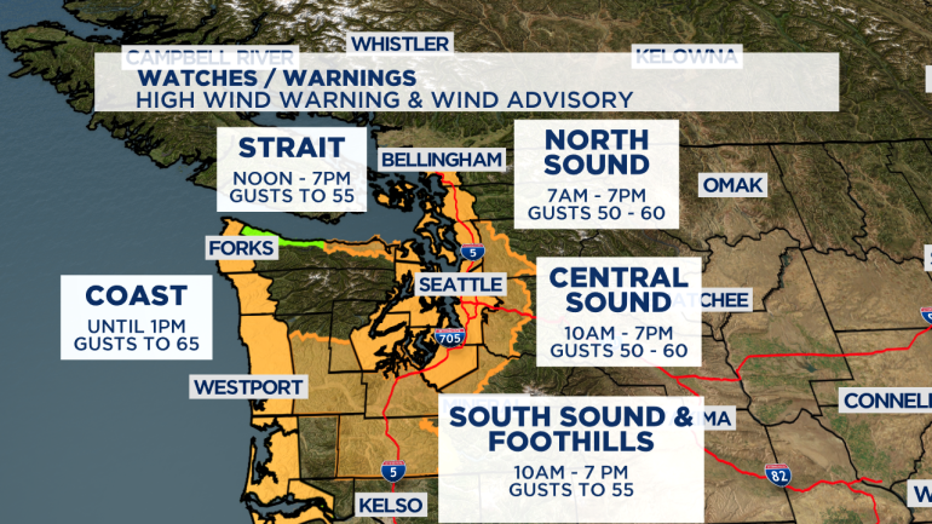 Washington State Ferries officials warned their northern waters runs such as the San Juan Islands run and the Port Townsend-Coupeville may experience delays or cancellations, while the Puget Sound runs should still operate, but may face rough seas and limits on boarding space.

Already, high winds caused the cancellation of at least two runs of the Port Townsend-Coupeville ferry as the boats reported sustained winds of 43 mph gusting to 53 mph.

Mountain snow is not a major factor this time around as this storm has tapped into some warm, tropical air and thus snow levels will rise above pass level for rain there instead of heavy snows.

The National Weather Service said there is an increased risk of landslides. Some areas have received up to 10 inches of rain in the last few weeks.