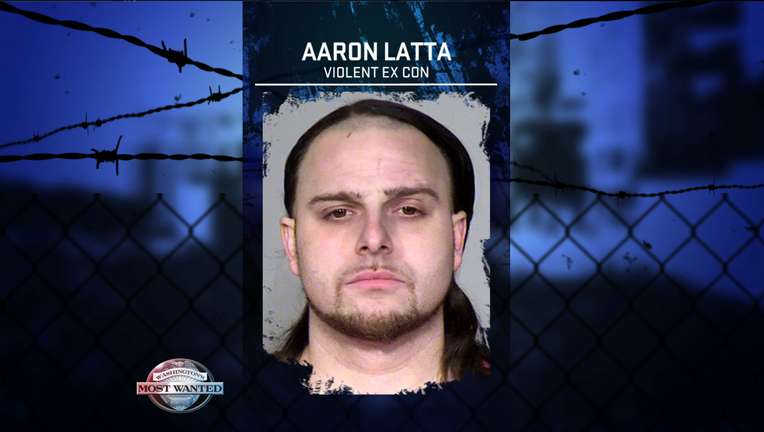 FUGITIVE CAPTURED Feb. 10, 2013 -- King County Sheriff's Sgt. Cindi West said that wanted fugitive Aaron Latta was arrested Feb. 10 after a viewer who saw him on Washington's Most Wanted called in a tip. Deputies found Latta at the Red Roof Inn. When one of the deputies spotted Latta, he took off driving backward through the parking lot and out on to South 171st St. The deputy followed Latta and rammed into his truck to stop him. Latta then jumped out of the vehicle and ran away as his truck rolled into a tree. Deputies chased him for more than 20 minutes through a number of parking lots and motels. When he was finally captured, he was taken to Harborview Medical Center because he had an elevated heart rate and a puncture wound to his chest, West said. He was released from the hospital and booked into King County Jail. ORIGINAL STORY (FEB. 8): Aaron Latta is a violent ex-con who police say is not only a career criminal, but it’s also likely that he’s armed. The King County Department of Corrections is asking for the public’s help in locating this off-the-grid fugitive. Detectives said that in 2010, Latta threatened to kill his girlfriend, drove off with his 18-month-old child, then left the toddler in the front seat while he stopped in at a 7-11. When he came out of the store, officers said he ignored their commands and took off, leading them on a chase. Officers backed off the chase because the toddler was in the car without a car seat -- eventually, Latta turned the child over to a family member later that evening. Latta has a history of reckless endangerment, robbery, trafficking stolen property, theft and assault. "He's been armed in the past and he's used a gun in the past. Don't take this guy for granted. He's a dangerous guy,” retired detective Myrle Carner, Crime Stoppers of Puget Sound, said. Latta has a tattoo on his right arm that says “Aaron,” and one on his left forearm that says, “Trust No One.” If you know police can find Aaron Latta, there is a cash reward for information leading to his capture and your call is guaranteed to be anonymous, so call Crime Stoppers at 800-222-TIPS. Text a tip here.