LYMAN, Wash. - The soggy season is definitely here in Western Washington. That means for many communities the threat of flooding returns.

It was 12 months ago when houses in the small town of Lyman in Skagit County hung on the brink of disaster because of fast moving, high water. The Army Corps of Engineers says last November's flooding along the Skagit could have been much worse. This year, the Corps is able to take some preventative action to keep the town safe.

Two backhoes dig relentlessly just a few hundred feet from the rushing waters of the river as truck after truck backs in a dumps huge boulders into the trench. Each one is 2,000 pounds or less.

"We're protecting public infrastructure from erosion," says Mike Wevodau with the Army Corps of Engineers. "It's a mixed gradation so that they lock together and they give you the protection you're looking for."

His crews will be working 24 hours a day the rest of the week digging a 500 foot long trench near the river and filling it with rock-- about 11,000 tons of it. That's the weight equivalent of the foundations for two Space Needles - all to protect the tiny town of Lyman, with a population about 450.

"We have our infrastructure, our power, our water is on that side of the street, it's an 8 inch water main," says Mayor Eddie Hills. "The cemetery is right there and the school just beyond." 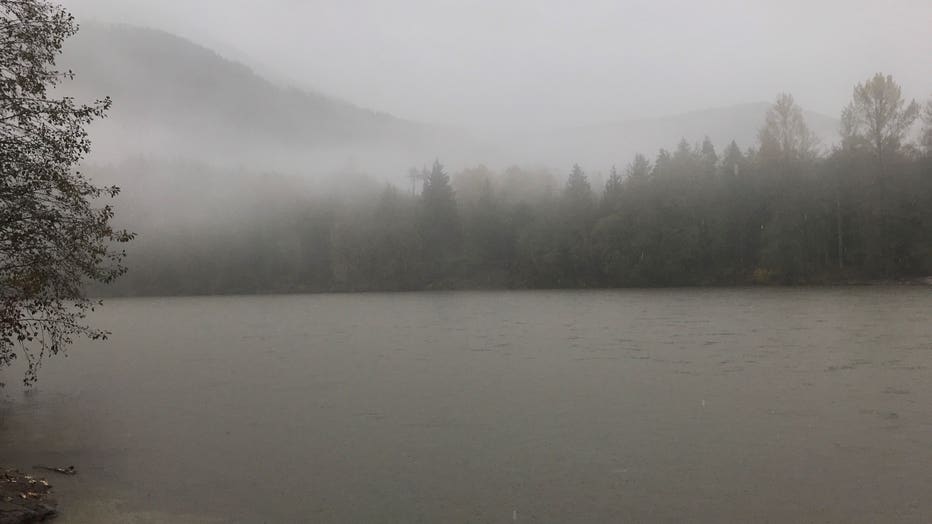 Swollen Skagit River on Thursday is expected to stay just barely below flood stage for this round of heavy rain.

Lyman is above flood stage, but it's built on sandy soil and silt. Last year the town discovered how quickly that sandy soil can disappear when the wild and scenic Skagit River shifts into side channels and sometimes carves new ones. Every curve in almost every river has a side where the sediment is deposited and a side where it erodes. This causes naturally flowing rivers to meander over time. For Lyman, it happens to lie on what's becoming the erosion side of the river's path.

"The one thing we didn't know," says Mayor Hills, "is how fast the river is taking over this channel."

While some heavy rain is in the forecast for Western Washington over the next 24 hours, the Skagit River is expected to stay within its banks this round of rain and stay below flood stage. But, this is only the beginning of the rainy season and folks in Lyman and everywhere along the Skagit River have a whole long wet winter still to go.