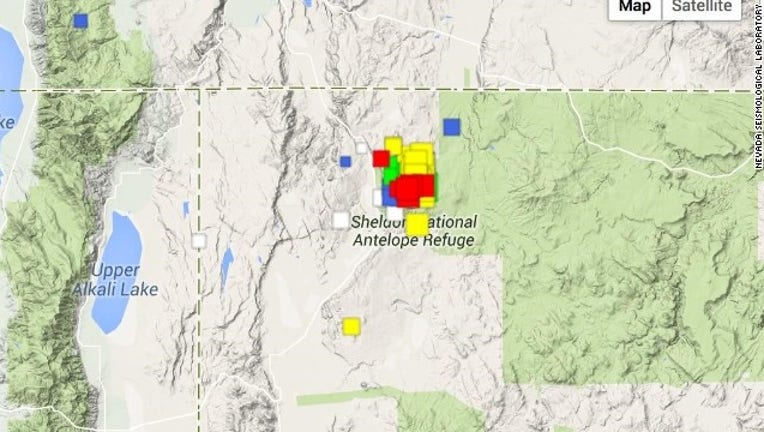 Hundreds of earthquakes have hit northwestern Nevada this year.

(CNN) -- Hundreds of small earthquakes have rumbled under northwestern Nevada like a seismic drumroll since midsummer, and in recent days, they have built to a crescendo.

Though this does not necessarily mean a big one will come, state seismologists said, but they added that it's good to be prepared, just in case.

Seismologists refer to such quake groupings as swarms, and the U.S. Geological Survey has detected them regularly. They can produce thousands of small tremors.

In September, for example, about 500 miniquakes struck southeastern California in about two days. The largest topped out at a magnitude 3.8 -- a strength that could be felt but was not dangerous.

But the Nevada swarm buzzing in and around the Sheldon National Wildlife Refuge has gone on since July 12.

In recent days -- since October 30 -- they have grown stronger, with three over magnitude 4.0.

The strongest one weighed in Tuesday at magnitude 4.6 -- approaching the threshold of a lightly damaging quake.

"There is a slightly elevated risk of a larger earthquake while the swarm is active," said seismologist Ian Madin from neighboring Oregon.

In 1968, in nearby Adel, Oregon, a swarm lasting several months produced three quakes of about magnitude 5. "The Adel swarm caused moderate damage," the NSL said.

Another, shorter swarm near Reno, Nevada, in 2008 led to a magnitude 5 quake and caused moderate local damage.

The vast majority of the current Nevada swarm's quakes have been undetectable to people walking around on top of them. Since they started four months ago, Nevada Seismological Laboratory has recorded around 550 quakes of magnitude 2 or higher, and 42 with intensities above 3.0.

The center of the activity is in a sparsely populated area, the USGS says. There are two towns about 40 miles away, each with a population of about 2,500.