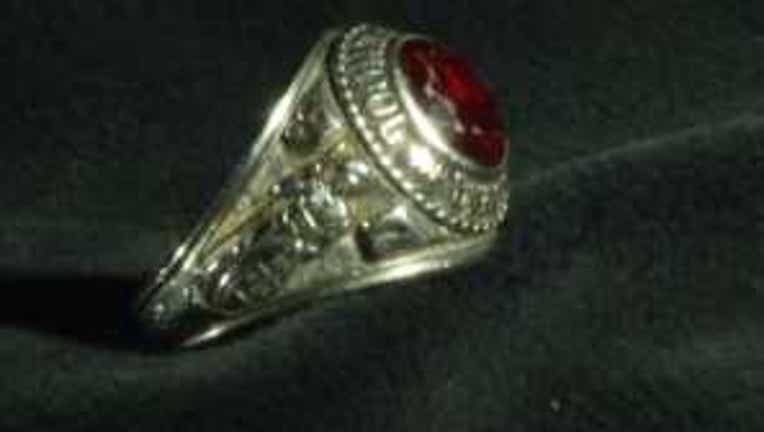 ALOHA, Ore. -- Rings in our culture signify many important events like graduations, weddings and special achievements, just to name a few.

For one Oregon soldier, however, the ring he wears tonight signifies something different. And to understand the incredible journey of this ring, you have to see where it has been.

That takes us to Afghanistan.

The ring was lost by an American soldier in Afghanistan in 2005, maybe 2006. The truth is, it's not clear how the ring was lost, and even how it was found is a bit of a secret.

"We were going through one of the villages and one of the locals came up to me and I couldn't understand what he was saying, but he showed me the class ring and gave it to me," said Ken Stafford, speaking from San Antonio, Texas.

Stafford was serving in Afghanistan in 2006 when the ring came into his life. He knew right away it was a high school class ring and he assumed it must have belonged to an American killed in action and taken from his body.

"I don't know how they got it, you automatically think the worst, but I'll take the ring anyway regardless," Stafford said.

Stafford put the ring aside for safe keeping, but brought it out this year, determined to solve the mystery behind it. He wanted to return the ring to the dead soldier's family.

He had one word to go off of on the ring: "Aloha."

"I thought it belonged to someone who went to school in Hawaii," Stafford said.

Stafford asked his neighbor, who just happens to be from Hawaii, for help.

The ring has a warrior on both sides, and Kalani Young said it's a warrior that dates back to the days of King Kamehameha.

Convinced they were on the right track, Stafford and Young decided to have the ring blessed and they videotaped the ceremony.

"When we think bad spirits or events are surrounding an object, our tradition is to bless it with a Kahuna, a Hawaiian priest, so I took it upon myself to have it blessed and wrapped it up in tea leaves," Young said. "And that's the last time I ever saw it."

The ring may have been blessed in a traditional Hawaiian manor, but it's not actually from the islands at all.

Stafford and Young contacted Fox 12 asking for help reuniting the ring with its proper owner. All there was to go on was the faint initials inside the ring, "BJB." It also had the year on it.

A quick look through the Aloha, Ore., High School yearbook from that year produced a "BJB." His name is Bryant James Beebe.

Then came the best news of all. Lt. Col. Beebe was still very much alive.

The ring had traveled around the world, but its last stop wouldn't have it going very far at all. Beebe's parents live only about a quarter-mile from the Fox 12 station in Beaverton, Ore.

When they arrived at the home, they were greeted by Bryant. They handed him the ring in a bag surrounded by the blessed tea leaves.

"That is unbelievable, that is absolutely unbelievable," he said. "I had no idea where along the way I had lost this ring and to have this back in my hands right now after being found in Afghanistan it's incredible."

The ring doesn't quite fit anymore, but that wasn't important to Beebe at that moment.

"God bless the people who found this in the heat of battle and we know more details than what we'll say, but God bless them for noticing that, keeping track of the item and coming back and making the effort to return the ring," he said.

Beebe wanted to thank the men who had helped bring the ring back into his life.

That was arranged at the Fox 12 studios, where Beebe met Stafford and Young live via a video monitor.

"Thank you for doing all the work that you did to return this class ring to me," Beebe told the men. "I can't believe I'm holding it again in my hands."

Beebe is still in the Army and now works out of Washington D.C. He said he took the ring to a jeweler, got it resized and now wears it with an incredible amount of pride.