It was a warm August day and Andrea Haisch, her boyfriend Angus, her mother Karlene and brother Kurt were spending the morning rock climbing. It was Andrea’s first time climbing. 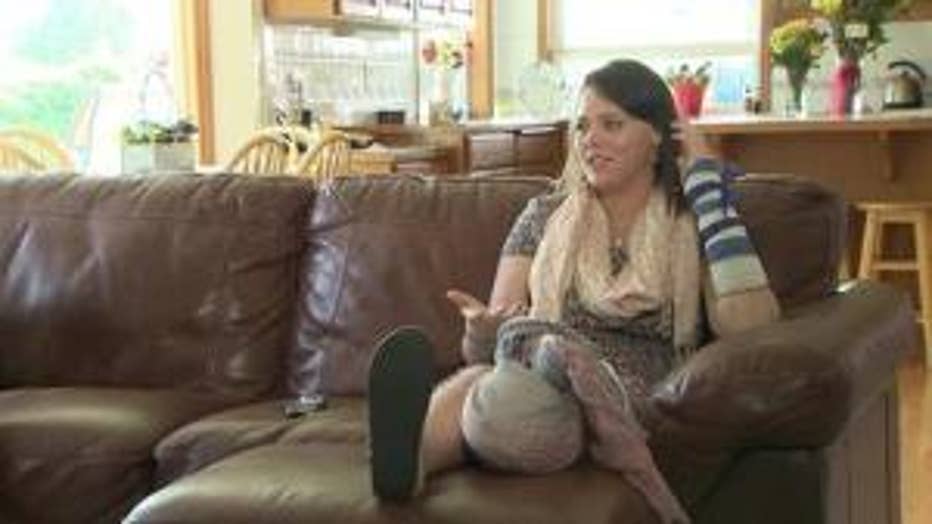 “I was just sitting on a rock, he was climbing up,” she said. Andrea’s older brother Kurt was about 50 feet up the hill when she heard him yell.

“A big rock was coming down — I saw it and tried to run.”

“When he said the word ‘falling,’ I literally looked up and saw my daughter just taken away in a rock slide. It was almost like an avalanche just taking her away,” Karlene said.

When it was over, Andrea had been carried by rocks almost 60 feet down the hill. A boulder about the size of a refrigerator was on top of her.

“A 3,000 pound boulder on my right leg and I looked over to my left leg and it was just totally de-gloved. There was no skin on top of it, I could see my bones.”

Kurt had fallen nearly 50 feet in the rock slide. He couldn’t move and was having trouble breathing.

Karlene had no choice but to leave her kids and go to the road and wait for help.

“I literally prayed to God, ‘Please let my children be alive when I return.’ At that point, that was my goal, let me have my children alive,” Karlene said.

The boulder that landed on Andrea’s leg took rescue teams more than an hour to remove and they had to use the Jaws of Life extrication equipment to remove it.

“Our biggest thought was if this foot looks like that, what is this leg going to look like?,” Andrea said.

“There were three people on either side of me who yanked me out real quick. It was a miracle — I have a few scars on my leg and nothing else.”

Her left foot was a different story.

Andrea was airlifted to Harborview Medical Center for emergency surgery.

“A doctor came into my room. He sat down and I knew that it was serious because no doctors have the time to sit down in your room — that was the first time the word amputation was brought up,” she said.

Two weeks after the accident doctors amputated Andrea’s left leg, below the knee.

The reality has been hard to take.

“I still haven’t seen my residual limb just with the true flesh. I keep it covered. When I have a cast change, they bring a blindfold. I’m not ready to see it,” she said.

Loretta is helping Andrea cope. The two met at an amputee support group meeting at the hospital. Loretta had her foot amputated as a child.

“I’m pretty lucky to have shape in my leg so it will naturally hold this on,” Loretta said.

Loretta has helped Andrea focus on the future and realize she can still do all the things she wants, like graduate from college, become a teacher, get married and have kids.

“I was like, ‘Tell me what your life is like’ and she pretty much said there’s nothing that I can’t do,” Andrea said. “For me, that’s all I want. All I want is a life I’d always imagined. And to see that through her was incredible.”

“Focus on the positive, focus on the things you can do. Find the things that you love and enjoy and just be thankful for them,” Loretta said.

Kurt is also lucky, he could have been paralyzed — or worse — the fall he endured left him with several fractured vertebrae.

He recently went back to the accident site with his dad, Dan. They found the boulder that had pinned Andrea.

They came looking for closure and to fill in the gaps of what happened that day to their family. They may never know why the boulder came loose, but they know they’re lucky. Dan found andrea’s shoe halfway up the hill.

“I’m a lucky parent, we’re all lucky — both kids are alive,” Dan said.