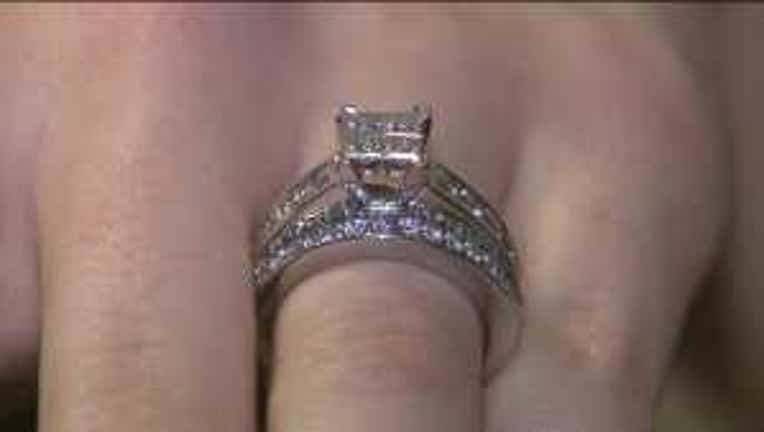 TACOMA -- A couple has been reunited with a diamond wedding ring that they thought was gone for good.

The story of the lost wedding ring starts and ends here on Steele Street in Tacoma.

“It`s one of those cliches, like, oh yeah, your best man is going to lose the wedding ring,” said Bryce Williams.

But that`s exactly what happened. Bryce Williams' brother and best man lost the $6,000 wedding ring on their big day – Dec. 29.

Williams’ wife, Kenzie Williams, recalled what she said when her husband-to-be told her what had happened.

“What the heck, are you serious? I was actually a lot more calmer than I thought I would be. I was actually felt more bad for him,” Kenzie Williams said.

Weeks went by and the couple thought the ring was gone for good.

“Right in the middle of the road was a white box and actually two feet in front of it was a plastic Kay jewelry box,” said Trevor Baarton, a neighbor who found the ring.

You would think finders-keepers but Baarten is one honest man and wanted to teach his son how to do the right thing.

“His first instinct was to pawn it, but I said that wasn't right. I even had him checking Craigslist every day,” Baarten said.

Then Bryce Williams went to the Kay jewelry shop in Tacoma to look into the warranty on the ring and that's when an employee mentioned Baarten had been checking around for the owner of a lost ring.

“She said somebody on Steele Street had been calling all the Kay jewelers,” Williams said.

Bryce and Kenzie discovered the ring was not only safe -- but just four doors down from their home, with their neighbor.

Turns out the best man left the ring on top of his car and drove off, and that is how it ended up in the street.

“The best man was excited; he was jumping up and down,” Baarten said at the reunion of the ring with the neighbors.