'A Heroes Thanks:' New vaccine lottery announced for military in Washington

The announcement comes after last week’s start of a lottery that has already had two drawings for $250,000 prizes, and also includes giveaways for college tuition assistance, airline tickets and game systems, among other prizes.

OLYMPIA, Wash. - Washington Gov. Jay Inslee on Thursday announced a new COVID-19 vaccine incentive lottery for the state’s military, family members and veterans because the federal government wasn’t sharing individual vaccine status of those groups with the state and there were concerns they would be left out of a previously announced lottery.

The announcement comes after last week’s start of a lottery that has already had two drawings for $250,000 prizes, and also includes giveaways for college tuition assistance, airline tickets and game systems, among other prizes.

A final drawing in that lottery will be for a $1 million prize on July 13. Washington is among several states that created lotteries in hopes of increasing the pace of vaccination. The governor’s office believe the state is the first with a separate lottery for those who have been vaccinated at military locations.

"I’m really happy to say we have found a way to honor our active military duty and our veterans in this regard," Inslee said at a news conference.

RELATED: Over 100 prizes unclaimed in Washington's 'Shot of a Lifetime' vaccine lottery

The new lottery applies to military, military staff and family members who were vaccinated through the Department of Defense, Veterans Affairs, or the National Guard. Mike Faulk, a spokesman for Inslee, said that the Department of Defense will be involved in circulating a form for military members to fill out. Veterans and National Guard members vaccinated through those facilities do not have to sign up because Department of Veterans Affairs and the National Guard have agreed to give the state random numbers that they have associated with vaccination records on their end, Faulk said.

U.S. Army Specialist Andres Ramos administers COVID vaccines at JBLM. Ramos went to school for culinary arts in South Carolina. He said if he is a lucky winner, he plans to set aside money for his kids' education.

"I got debt!" laughed Ramos. "Student loans, ol' Sallie Mae got me."

Ivan Arriaga joined the U.S. Army more than a year and a half ago. While at JBLM, the California native loads ammunition on vehicles for launching. He said got the COVID vaccine for his mother.

"My mom kind of pushed on me, just being a mom just worrying about me like a good mother should," said Arriaga.

If he wins the new lottery, Arriaga said he plans to treat his mother. He said he appreciates the state considering military members in this exclusive vaccine incentive.

"Feels pretty nice. Feels like we’re getting thought of, thought about," said Arriaga.

Inslee has said the state will fully reopen its economy by June 30, or sooner if 70% of residents age 16 and older have received at least one dose.

As of Thursday, nearly 68% in that age group have received at least one dose, according to the governor’s office. 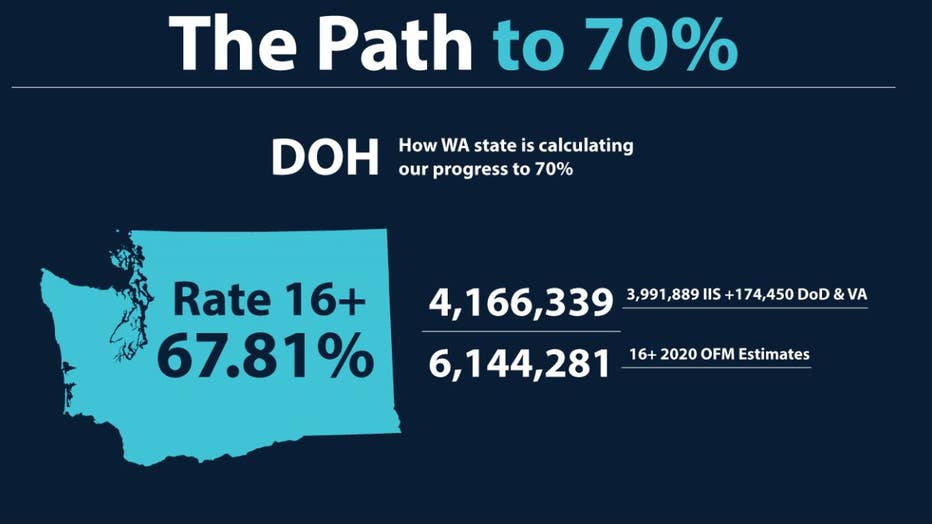 All of the state’s 39 counties are currently in the third phase of Inslee’s four-stage reopening plan, with restaurants, bars and gyms able to operate at 50% indoor capacity.

Republican leaders in the state Senate and House have called on the governor to fully reopen the state now, citing action in the majority of other states, and well as differences in federal numbers and the delay in data sharing for military members.

Inslee has said federal and state numbers aren’t an equal comparison since the CDC uses information for people age 18 and up based on 2019 population numbers, and the state is using 2020 population estimates for those age 16 and up.

Inslee said it’s possible the state could hit the 70% mark sometime next week.

"I want to get those businesses open as early as possible, that’s why I’m urging people to get vaccinated today," Inslee said.