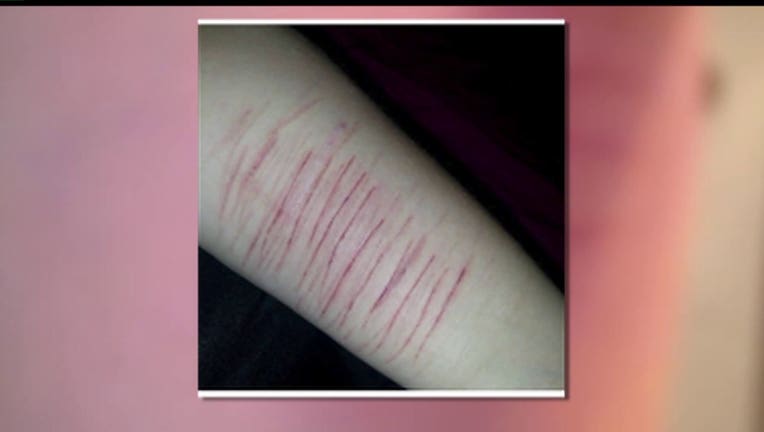 SEATTLE -- A disturbing trend is sweeping Pacific Northwest middle schools: Young girls and boys are cutting themselves – putting a razor blade to their skin -- as a way to "fit in."

They’re keeping it from their parents, but broadcasting their secret all over social media.

Now, one girl is speaking out, worried about the safety of her friends and classmates.

"It's just really scary to even think someone would want to pick up a knife and cut their own skin just to fit in," she said.

But kids admit they are.

This 11-year-old girl asked us to hide her identity for fear of backlash from fellow students.

She says cutting is a big trend among middle schoolers and it’s happening right here in the Northwest.

So far, she's already reported three of her friends to school counselors.

"I know people have been posting it on Instagram and then I've seen posts about suicide after that," she said.

They may be hiding the cuts under their clothing. But, she says, they're baring all on social media such as Instagram and Snapchat.

"These leave permanent marks; this is dangerous," said child safety expert Kim Estes, who added that it is happening at middle schools all over the country.

And it not just girls who are doing it, but boys, too.

"They are trying to fit in. Middle school is a big transition for children and they will try all sorts of things, even scary stuff like cutting, because it feels trendy," Estes said.

The 11-year-old girl said, "It's a thing where girls are just like, ooh, I gotta try this, my friends are doing it. I i just gotta try it."

Estes notes kids are not doing it on the obvious places, like wrists or arms, where parents could see.

"It's on their stomach, their knees, their thighs --  places not as visible to parents. So that by the time a parent observes it or sees it, it may have gotten pretty far," Estes said.

Estes says it's imperative parents have an open dialogue with their kids about drinking, drugs and now cutting.

"Remain calm when they come and talk to you. Don't freak out because if you freak out, they are gonna stop talking," Estes said.

The young girl said she would rather say 'sorry' for telling on fellow students than be sorry for keeping quiet.

"I did have to say I'm sorry I told, but I would rather have you be safe than you cutting your skin so you think you can fit in, because that's not the right way to fit in," she said.

It’s another reason for parents to monitor their child’s activities on social media.

Our expert tells us – if you discover your child is cutting themselves – it’s vital that you get them professional counseling.