HOOD CANAL, Wash. -- The more we learn about the dwindling populations of Washington's signature animal-- the Southern Resident orca whale-- the more researchers are learning about how intertwined our region's ecosystem really is.

The key to saving Puget Sound's resident killer whales could be saving their source of food:

Q13 News' Tim Joyce shows us more about one environmental group trying a novel approach to getting more fish in the water.

The Lilliwaup River in Kitsap County empties into the Hood Canal. For generations it's been a special place for salmon.

Now, it may be steelhead salmon's best chance in bringing population numbers up to what they once were.

"It's our responsibility," said Joy Waltermire, a fish biologist with Long Live the Kings. "We are their only hope."

Long Live the Kings is working with government fish managers, tribes and other environmental groups to see if limited help from people can save steelhead  from the brink of extinction in the Hood Canal. The non-profit tracks fish numbers, monitors potential environmental perils, and is also working with the Lilliwaup Creek hatchery to innovate ways to native fish.

The hatchery on the Lilliwaup River is different than traditional hatcheries. Instead of fertilizing eggs in tanks and releasing fish when they're young; steelhead from the Lilliwaup Creek hatchery come from wild eggs. The eggs are plucked from the waters, and raised to sexual maturity in pens.

"What we're allowing the fish to do is come home," Waltermire said. "They find a mate... and do as any other wild fish would do."

"We are their only hope."

Of course, the Lilliwaup River project is just a pilot. But data has shown it has helped improve steelhead numbers by as much as 300 percent.

The hope is to give them a generational boost, Waltermire said. Instead of only a small percentage living, the special hatchery may bring more salmon back to the river to spawn.

"Let the population be stronger and sustain itself onwards," Waltermire said.

Long Live the Kings is looking into Puget Sound and the waterways that flow into it. The Salish Sea Marine Survival Project is tracking migration of fish through our marine environment to understand what’s affecting salmons' mortality. 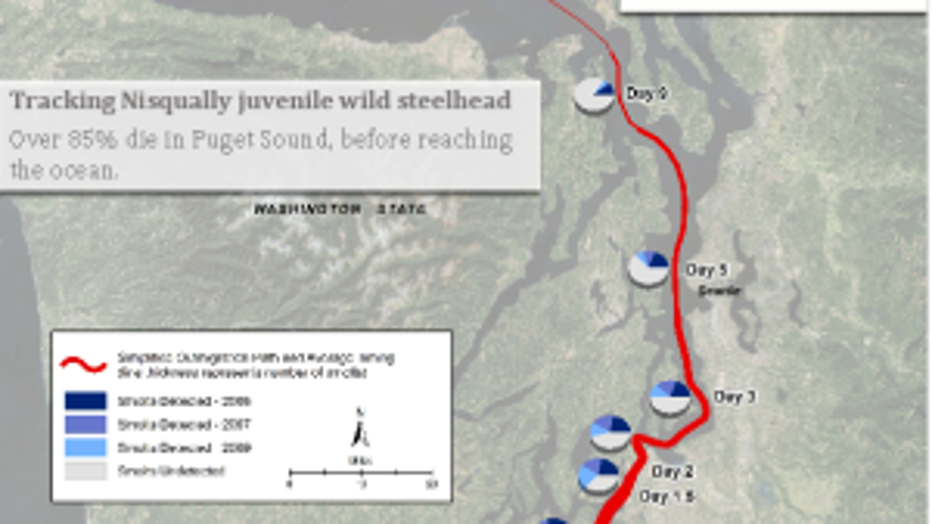 From Long Live the Kings.

13 News is working with Long Live the Kings throughout the winter and spring to follow the story of what's impacting our local salmon population.