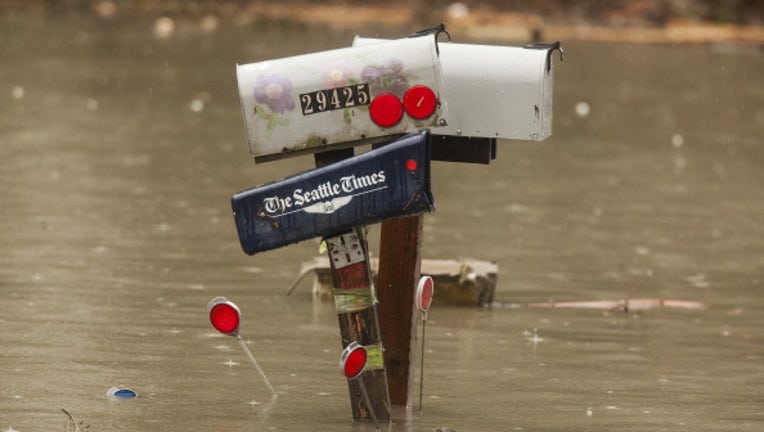 Mailboxes are pictured in flood waters caused by the Oso mudslide on Washington Highway 530 on March 29, 2014 in Oso, Washington.

MONTESANO, Wash. -- Grays Harbor County is one of the wettest counties in the state. Months and months of heavy, cold rain are followed by brief sun breaks. Followed by more rain.

With rain comes mudslides. So when the devastating Oso Mudslide hit nearly a mile long section of Highway 530 in Snohomish County March 22, it's safe to say Charles Wallace, the deputy director of the Department of Emergency Management for Grays Harbor County, was watching.

Like all others he was horrified -- and amazed -- at what he saw.

"We get slides all the time, especially this time of year," Wallace said of Grays Harbor County. "But no one has seen anything like that slide. Usually you get slides a couple of yards wide. This was a mile square."

The immensity of the slide had the deputy director reevaluating Grays Harbor County's mudslide warning systems. Could one of the most slide-prone areas in the state recognize a slide of that size and consequence?

And how, if possible, could they be stopped?

A call for warnings

Since last week's slide, many have called for more advanced or comprehensive warning systems for landslides. Timothy Eagan of the New York Times wrote a popular Op-Ed piece describing his time on the ever-changing Stillaguamish River, and how, for years, massive slides have been looming. A section of Eagan's piece was particuarly critical of Snohomish County officials who, he believes, didn't do their job to warn the public of potential slides.

A report issued by the NW News Network suggested a landslide warning system, like one in California, should be put in place through the legislature.

"In Washington, sellers must disclose if the property has been damaged by an earthquake or landslide," the report reads. "But there's no explicit requirement to disclose, for instance, if there's a slide-prone hill nearby."

Though the legislature may take up this issue in January, Wallace wondered allowed how predictable a slide of that size could be.

"There hasn't been anything like that slide," Wallace said.

No stranger to slides

According to Wallace, the county and state -- the two agencies that monitor landslides in Grays Harbor County, depending on their location -- see hundreds of mud and landslides each year, most only a few yards of mud wide.

But bigger landslides happen, and Wallace and the county have devised a comprehensive warning system to help inform property owners of potential costly slides. Severe rains and saturated grounds are watched extensively by Wallace and other county employees, who help curate a Facebook group and an email list to sends out updates and landslide alerts from the National Oceanic and Atmospheric Administration. Early spring is common time for landslides, and warnings can be sent out once or twice a month.

Along with the email alerts, county employees on the road are trained to recognize the many physical, geographical warnings of a landslide. From small variations in the ground to bulging earth, ground and tree movement can hint at big slides, Wallace said.

Wallace offered these tips as indications that a slope faced stability issues:

Wallace said the county also keeps a record of where previous landslides have occurred. Where they have happened once, they easily happen again, Wallace said.

"We know where they've been in the past, so we keep a close eye on those areas," he said, mentioning that like the Snonohmish County slide, areas where timber has been cut are more prone to failure.

But county workers can only recognize so much, Wallace said. It's up to the homeowner, the one who truly knows the property, to recognize variations and possible land movement.

"They need to be very aware we get severe weather and issues that create bad situations," Wallace said. "If they notice something moving, they need to call us."

Without warning, or paying no heed?

Despite warning signs, not all slides are predictable. And the biggest slides, like the one in Snohomish county, may be the hardest to predict, Wallace said. Simply because there is the least amount of scientific data and collected evidence behind when they strike.

"Right now we don't have much evidence on those kind of slides," Wallace said. "It was hard to comprehend something like that."

However, the Snohomish slide did seem to have warnings, Wallace said. There were slides in nearly the same location in the 90s, and again in 2006. Logging -- possible illegal logging that used outdated date according to a Seattle Times report -- may, repeat may, have contributed to the cause of the slide.

By some accounts, Wallace said, the director of Snohomish County Emergency Pennington, did warn people about the danger he and others saw coming. But short of banning new building or condemning a privately owned home, there may have been little the county could have done to lessen the tragedy of the slide.

It's difficult to convey the gravity of danger to people sometimes, Wallace said, especially with a disaster the size and scope little have ever scene. Nature is capable of so much, Wallace said, that it can be hard to get people on board.

"Sometimes it's very hard to bring science to reality," Wallace explained. "You tell people they are in danger and they say, 'that's my home.' They can't easily abandon a home they have a mortgage on, no matter what you tell them."

"The earth is alive," Wallace said. "It's not dead. And the earth moves no matter what."