SEATTLE -- Emergency calls to a 911 operator from a Sea-Tac Airport ramp agent caught in the cargo hold of a plane were released Thursday, showing just how panicked the worker caught in the hold was.

Alaska Airlines Flight 448 was just barely on its way to Los Angeles from Seattle-Tacoma International Airport Monday afternoon when the unidentified worker from Menzies Aviation, an airlines contractor at the airport, stuck in the cargo hold called 911.

"Hello, I'm stuck in this plane," the worker says.

"I'm inside a plane and I feel like it's moving in the air," the man says, beginning to panic. "Can you please tell somebody to stop it."

The operator, still confused, asks him what plane he is in and if he's at the airport. Soon, the worker's phone begins to cut out.

"By myself," the man can be heard frantically yelling. "Please!" 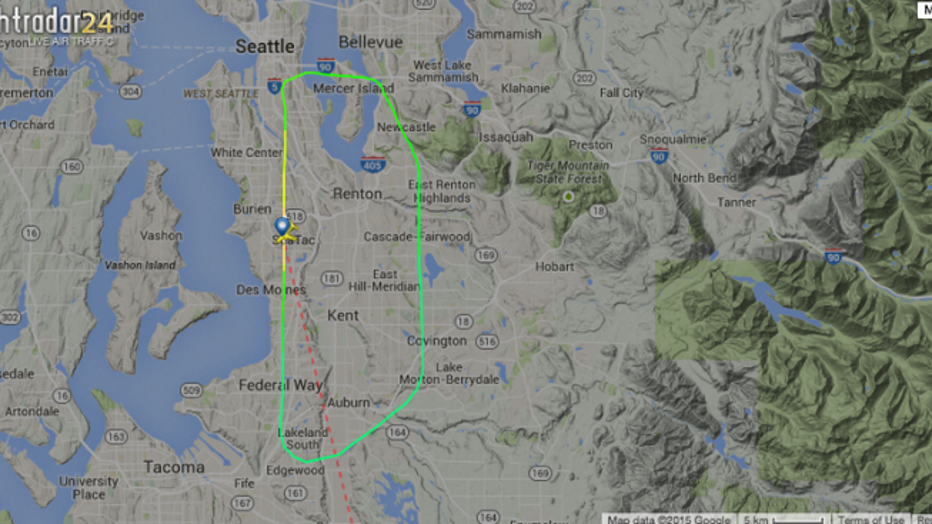 The operator tries to call back after the call cuts, but the phone appeared to be out of service.

Luckily, the man was able to bang on the cargo hold to alert the pilots and the plane turned back around. The plane landed without injuries to the man. The cargo hold is pressurized and temperature controlled, the airline said. The plane was also only in the air for 14 minutes.

According to CNN, passengers knew something wasn't right almost as soon as the plane took off.

"All of a sudden we heard all this pounding underneath the plane and we thought there was something wrong with the landing gear," Robert Higgins told CNN affiliate KABC.

"At that point, we started hearing yelling, screams for help, very, very faint," Jamie Davis said. "That's when we notified the flight attendant that there was somebody underneath us."

As the banging continued, a federal air marshal sprang into action.

"At some point, the marshal kind of made himself known," said passenger Troi Ge. "He started banging back, and he yelled really loud and said, 'We're getting ready to land, hold on to something.'"

Once the plane landed, the ramp agent was taken to a hospital as a precaution. He passed a drug test and was discharged.

The employee started work at 5 a.m. Monday and his shift was scheduled to end at 2:30 p.m., just before the flight departed. The agent was off the two days prior to the incident and had taken a lunch break and a break in the afternoon before making his way into the cargo hold, according to a source familiar with the investigation.

The man had been on a four-person team loading baggage onto the flight. The ramp agent allegedly fell asleep in the luggage area of the plane before takeoff.