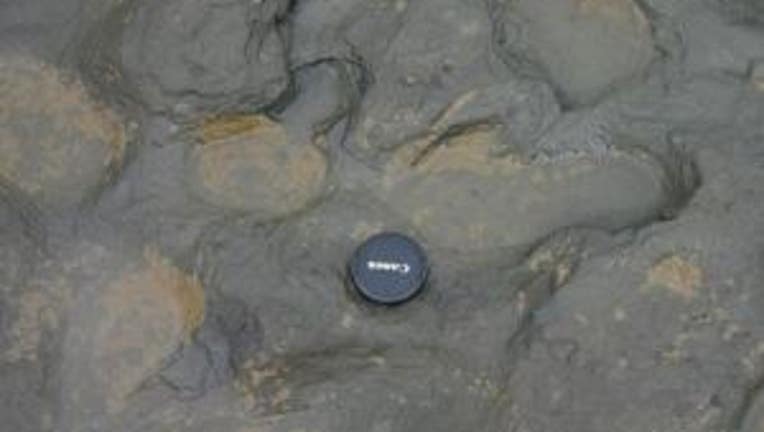 A team of British scientists have found what they believe to be the oldest human footprints in Europe, dating back at least 800,000 years.

Analysis of the prints revealed they were likely made by five early humans including men, women and children who were making their way south along the muddy banks of an ancient estuary.

The researchers cannot say for certain what species of early people made these prints. However, in a paper describing the discovery in the journal PLOS One, they note that the foot sizes are similar to those of Homo antecessor, also known as "Pioneer Man."

Pioneer Man fossils dating to this era have been discovered in southern Europe. The species appears to have gone extinct 600,000 years ago.

The ancient footprints were revealed in May 2013 on the beach of Happisburgh along the eastern coast of  England. They were discovered by accident after strong tides removed sand from the beach, revealing a mess of unusual markings in the dark silt below.

"At first we weren't sure what we were seeing," said Nicholas Ashton, a curator at the British Museum and the lead author of the paper in a statement, "but as we removed any remaining beach sand and sponged off the seawater, it was clear that the hollows resembled prints, perhaps human prints."

The researchers knew the prints would not last long. They had been preserved for hundreds of millennia only because they had been buried deep beneath the cliffs that line the beach. But the cliffs are eroding rapidly, and as they wash into the sea, they are uncovering earlier sediments at their base. The footprints were in one of these sediments, but now that they were exposed to the ocean waves, they would swiftly erode.

Over the next two weeks the team used photogrammetry and laser scanning techniques to produce a 3D record of 152 of the mysterious hollows. From these methods they were able to see that the impressions were elongated like a foot. They were even able to spot what looked like toe marks.

In the paper, the researchers say the footprints could not have been made by recent activity, because the sediment is now too compact and not squishy enough to make a footprint.

Just three weeks after they were discovered, the ancient footprints were gone, washed away by the sea.

But the record of the prints remains, and, there is always hope that as the cliffs continue to deteriorate, new footprints from the distant past will emerge.

For more about the discovery, check out the video below: