8-year-old twin girls were starved and abused before one died at just 29 pounds. Their mother and her boyfriend have been charged with capital murder - under 10 years of age and two counts of injury to a child. Court documents reveal a horrific case of child abuse.

HOUSTON - A woman and her boyfriend have been charged in the death of an 8-year-old girl and injuries to her surviving twin sister. The Houston girls were malnourished and physically abused over an extended time, according to court documents.

Soledad Mendoza, 29, and Ruben "Alex" Moreno, 29, were taken into custody last week and are both charged with capital murder – under 10 years of age for the death of Melanie Mendoza and two counts of injury to a child for her twin sister.

Houston Police say the girl died on the night of December 21, 2020, after she was taken to Memorial Hermann - Memorial City Hospital with multiple injuries and bruises by Houston Fire Department paramedics.

RELATED: 10-month-old baby girl dies after being left in car for several hours

Officers responded to a welfare check at the hospital for reports of a deceased child, where they found the victims were grossly emaciated and had signs of malnutrition or starvation and multiple injuries, including chronic rib fractures.

Despite being 8-years-old, they both only weighed less than 30 pounds, wore diapers, and were "extremely malnourished and unkempt."

Investigators say that there were two other siblings in the household, 7 and 12 years old, who were seemingly in perfect health, including a younger sibling who was physically bigger than the twins. CPS has removed all children from the care of Mendoza and Moreno, including a newborn girl who was still in the hospital at the time of Melanie's death, and have been placed in foster care, court documents say. 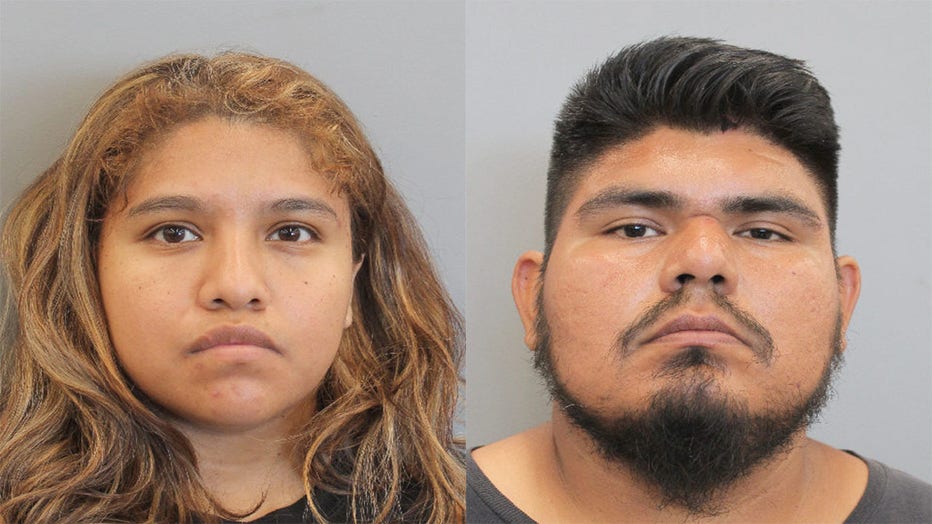 After a lengthy investigation, the child’s mother Mendoza, and Mendoza’s boyfriend, Moreno, were charged for their role in the child’s death and the injuries sustained by her twin sister.

The two were arrested last Friday, May 20, without incident.

It revealed that she suffered blunt force injuries of the head, upper extremities, torso, and lower extremities. Her ribs had injuries that were consistent with being weeks old, with at least one traumatic event occurring weeks prior to death, according to the documents.

When she was asked what happened to her sister, she replied, "My mom killed her."

The autopsy report also showed the girl had acute and chronic blunt force injuries to her back and legs. Her right adrenal gland had hemorrhaged from trauma. The autopsy also found brown fat in the girl's adrenal gland, which is indicative of starvation. Her bones showed indications of interruptions in growth.

Court documents also revealed the condition of the surviving 8-year-old twin girl, who was diagnosed with severe malnutrition, child physical abuse, loss of body weight and muscle mass, multiple rib fractures, and child neglect. She also suffered a fracture in her right forearm.

Two months later on Feb. 23, 2021, the girl, who was clean and at a healthier weight, was interviewed about her injuries and her sister.

"My mom is being mean to me - Not my foster mom, her real mom," she said according to court documents. She went on to tell investigators that Mendoza used to put her in the closet and would put her in a trash bag.

CLICK HERE FOR MORE ON CRIME AND PUBLIC SAFETY

When she was asked what happened to her sister, she replied, "My mom killed her."

Court documents indicate that Mendoza would push them and kick them and Moreno would hit them every day.

The surviving twin says their mom never gave her a lot of food, and some days Mendoza wouldn't give her any. She also said that Moreno found out that she and her sister ate some bread, and he responded by hitting them with a belt and a shoe.

According to records, the twins visited Clinica Del Norte in San Antonio and Kool Kids Pediatrics in Houston, where both girls were listed to be severely underweight. Documents say their mother was advised of this on each visit and given instructions to have the children gain weight and get within normal range for their age.

When interviewed about her daughters, Mendoza denied any involvement. She blamed the twins for their own condition, stating they didn't want to eat and that they would get sick, according to court documents.

When she was confronted that the children's emaciated state would have had to have been going on over the course of potentially years, Mendoza did not argue. She "just stated in a very stoic tone, ‘I guess I should have done more.’"

FOX 26 obtained Department of Family and Protective Services (DFPS) records that show multiple reports made regarding the twin girls. Investigators noted each time that the girls appeared to be underweight. At times, they were reported to be eating from trash cans, off the floor or taking others' food.

DFPS never confirmed allegations of neglect, and in one case, just closed the case at intake.

The first report of possible abuse or neglect was filed on Oct. 1, 2018 in San Antonio, the DFPS records show.

Then on May 7, 2019, there were reports the twins were not being fed, and they were eating out of trash cans. A Forensic Assessment Center Network consultation was completed and the results "showed concerns for malnutrition/starvation, failure to thrive, medical neglect, and physical neglect."

Three months later in August 2019, another report says the girls could not have breakfast or lunch at school because the mother said they ate at home.

Then on Dec. 16, 2020, Melanie was reported to have shown up to virtual learning in Houston with a black eye. The records from DFPS say an investigator went to the home for a welfare check. But Mendoza didn't let anyone near Melanie, saying she had a fever and was isolating. The girl died five days later.

Moreno’s bond was denied for the capital murder charge. He was given a $2 million bond total for the two counts of injury to a child. He was scheduled to appear in court appearance for Monday morning, but has been reset to Wednesday, May 25.