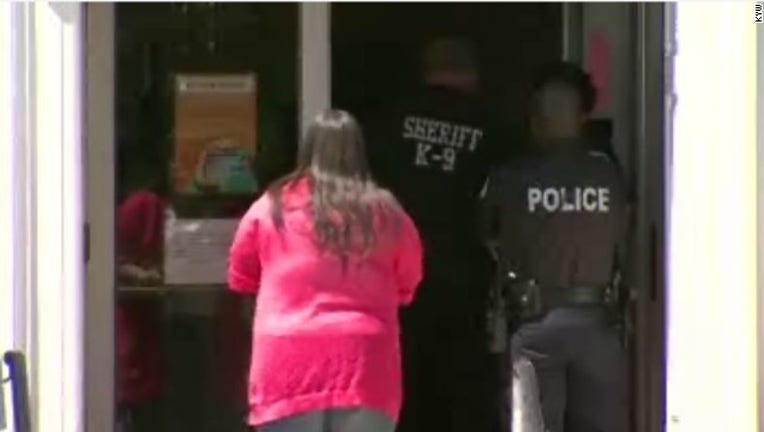 Police officers investigate after a first-grade boy was found with heroin at school. The boy's 56-year-old grandmother was arrested. (Photo: CNN via KYW)

WEST CHESTER, Pa. (CNN) -- Rather than a bagged lunch, a Pennsylvania first-grader brought bags of heroin into school -- giving some to at least one classmate before teachers caught him with a pocket full of drugs, authorities say.

Two days later, the boy's 56-year-old grandmother was arrested on charges of endangering the welfare of children and drug offenses for allegedly losing track of the heroin while babysitting, according to a local district attorney's office.

Chester County, Pa., District Attorney Tom Hogan expressed outrage over any child bringing a drug as potent as heroin into an elementary school. He also lashed out at the boy's school district for not doing more to inform parents as well as authorities, including his office.

"Any exposure to heroin for a young child is likely to result in death," Hogan said in a statement released Monday. "The (grandmother) is lucky that she was not responsible for the death of her own grandson or somebody else's child."

According to a criminal complaint detailed by Hogan's office, Pauline Bilinski-Munion was babysitting her grandson and a 1-year-old baby last Thursday at a residence in Modena, Pa. Bilinski-Munion had "brought heroin into the house and lost track of it," according to the district attorney's office, which referred to her as "a known heroin user."

The next day, the 7-year-old brought several bags of heroin with him into Caln Elementary School. Teachers overheard the child talking about the bags, and later found nine bags of what proved to be heroin -- with each bag stamped "Victoria's Secret" -- in the boy's pants pocket, the prosecutor's office said.

The child initially claimed he found the heroin in the school yard, only to later admit he'd gotten them from home. The drugs were then handed over to the Coatesville Area School District Police.

Another child's mother later claimed that she'd found an additional bag of heroin, with the same "Victoria's Secret" wording, on her 7-year-old as they were walking late Friday afternoon in a nearby mall, authorities said.

What happened next is a matter of dispute.

Yet Hogan faulted the school system for what he characterized as its "late and vague notification to parents about a 'dangerous and illegal' substance," and failing to alert his office, which didn't start investigating until hearing about the story in the media on Saturday.

"The school district didn't call 911, didn't call the DA's office, did not freeze all the kids in place, they did not call in emergency personnel to check all the kids to make sure they were OK," he told KYW. "They did not check to see if there was heroin anywhere else around."

Following her arrest Sunday, Bilinski-Munion was charged and held with bail set at $25,000. Efforts by CNN to reach her relatives have been unsuccessful, and it wasn't immediately known who is representing her in court.