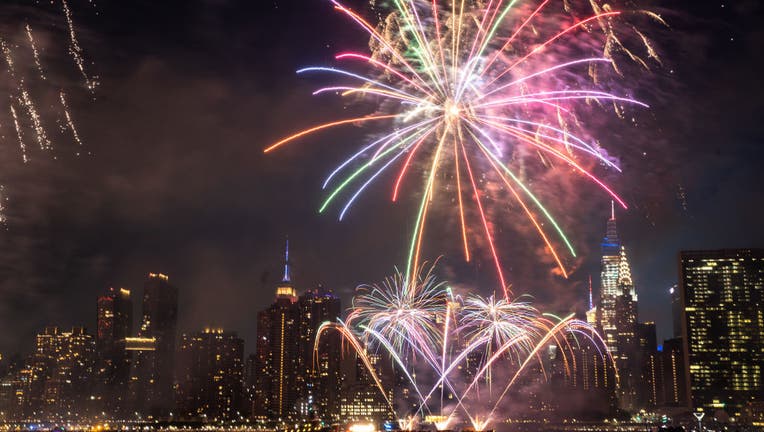 Fireworks during the Macy's Fourth of July celebration in New York, U.S., on Sunday, July 4, 2021. Macys annual fireworks display returned to its usual grand scale over the East River this July 4, the latest sign of normalcy returning to New York Cit

Every year more than 10,000 people across the country are injured in fireworks-related incidents, which force some families to seek a safer alternative to help celebrate Independence Day.

According to the Consumer Product Safety Commission, children and young adults make up 50 percent of the injured.

Because of the dangers, the National Safety Council advises everyone to either attend a display conducted by professionals or find one of the many alternatives that don’t have the explosive power.

Even sparklers are considered dangerous because experts say they burn upwards of 2,000 degrees and can easily ignite clothing and other flammable materials.

Here are seven alternatives to fireworks that can be family-friendly.

A colorful alternative that can easily be found online and in retail stores are glow sticks.

The plastic tubes typically light up after chemicals inside react with each other.

Glowproducts.com says that because of a dye inside the product, the tubes can glow and be visible for upwards of around 24 hours.

The retailer says temperatures do affect how long and how bright the sticks glow.

Warmer temperatures will cause the tubes to glow brighter, but the time of illumination will be shorter than in a cold environment.

In a colder setting, Glowproducts.com says the sticks will be dimmer, but their glow will last longer.

An eco-friendly and cheap alternative to fireworks are the classic bubbles.

Typically, soap or another type of liquid forms the wall that traps the air.

These floating objects only last for a few seconds and their shape is determined by the surface tension.

The University of Wisconsin has step-by-step instructions to make your own bubbles: Learn how.

An experiment that can be fun and also educational is foam that expands outside of its container and always has people wondering when the reaction will ever end.

The geyser is simply made of nothing more than hydrogen peroxide, yeast and water.

Because of the mess, there are some precautions that experts say you should take.

Steve Spangler Science has the need to knows about this experiment: Click Here

TRAVEL CHAOS: HERE’S WHY THERE ARE SO MANY CANCELED FLIGHTS

What is usually a birthday treat can be easily transformed into an Independence Day celebration.

Piñatas date back hundreds of years, and while there might be some controversy as to who started the tradition, there is no denying that it is fun to take a swing at these paper objects.

Instead of using candy as a treat, some do-it-yourselfers suggest adding red, white and blue streamers to enhance the patriotic flare.

The experts at Bemakeful.com have some helpful instructions for a DIY celebration: Click here to see more.

An environmentally safe way to ring in Independence is with a laser light show.

The large shows are put on by professionals, but more and more retailers are selling machines that can can be synced to music and provide for hours of entertainment.

Unlike traditional fireworks, a little bit of rain or clouds can actually help enhance the spectacle.

Experts advise users to be careful on where they point the lasers, as federal law prohibits the interfering with aircraft: Need to know details.

There are party poppers available in stores and those you can make at home that don’t involve pyrotechnics.

The handled devices usually make a loud "pop" when a string is pulled and out flies confetti.

Those with an eye for crafts can enjoy making family-friendly confetti poppers at home.

One of the fastest-growing alternatives to fireworks are drone shows.

While an average household usually only has one or two available, private companies that specialize in shows can deploy hundreds that light up the night's sky.

Because several cities have banned fireworks due to drought conditions, the demand for drone shows is high.

Hire UAV Pro, a Colorado-based company, said its phones have been ringing off the hook by communities interested in drone shows.

A company representative said they are already working to increase their fleet of drones for bookings in 2023.

GET THE LATEST EPISODE OF THE FOX WEATHER UPDATE PODCAST