TISHOMINGO, Okla. - Six high school students in Oklahoma who were killed this week in a crash with a semi-truck had been riding in a small car with only four seats, officials said.

The crash was reported Tuesday afternoon in Tishomingo, a rural city of about 3,000 located about 115 miles southeast of Oklahoma City, according to the Oklahoma Highway Patrol. The six teens, all girls and students at Tishomingo High School, were at a stop sign at the intersection of U.S. 377 and Oklahoma 22 around lunchtime when they collided with a rock hauler, KFOR-TV in Oklahoma City reported.

Only the car's 16-year-old driver and front-seat passenger were wearing seat belts while riding in the four-seat 2015 Chevrolet Spark, the Oklahoma Highway Patrol said. The crash report, released Wednesday morning, said the circumstances of the wreck remained under investigation.

"We don’t know the full nature or details of what caused the crash, only that the car at some point was at this stop sign and that in the following moments the semi hit them," an Oklahoma Highway Patrol official said, according to KFOR-TV. "When we got to the scene you could see the car about 100 feet or so from the intersection, completely totaled." 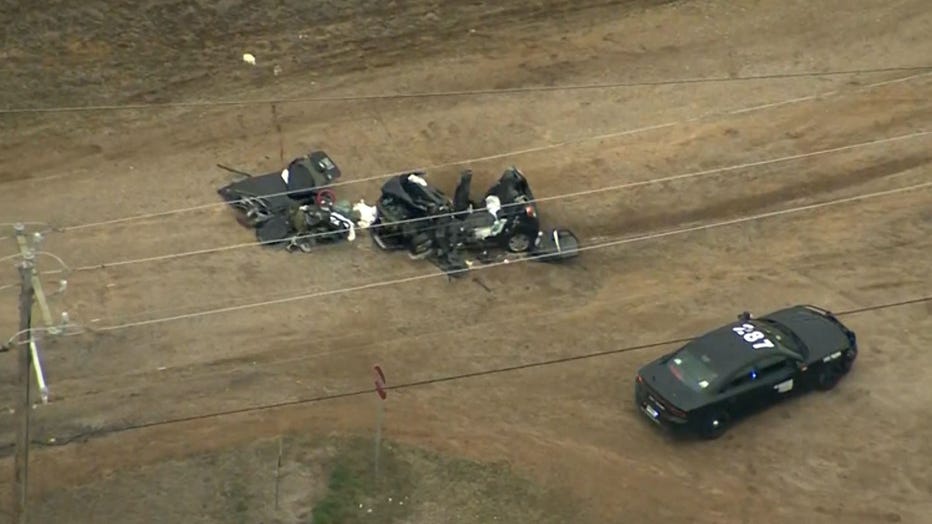 Aerial footage shows the vehicle following the crash with a semi-truck on March 22, 2022, in Tishomingo, Oklahoma. (Credit: KWTV / KOTV)

Those killed included the 16-year-old driver, three 15-year-olds, and two 17-year-old passengers, the highway patrol said. The girls' names weren't released because they are juveniles.

Images from the scene of the crash showed a virtually destroyed black vehicle with what appeared to be a pink steering wheel among the rubble.

"It’s probably hard for me to put into words," Humphrey told the local news station. "I mean, when you think about six young peoples’ lives, that’s tragedy anywhere."

The highway patrol identified the driver of the semi as Valendon Burton, 51, of Burneyville, Oklahoma. The report said Burton was not injured in the crash. 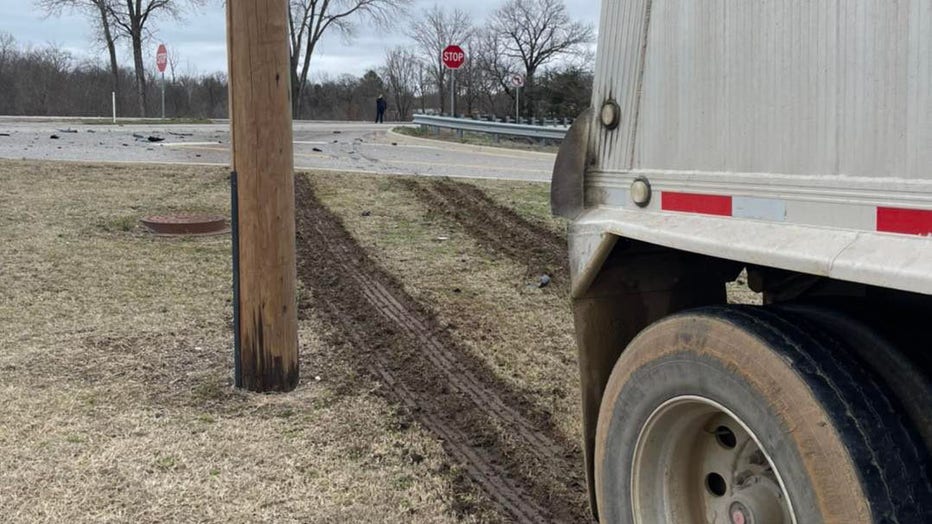 Skid marks in the grass are pictured at the scene following the crash is pictured on March 22, 2022, in Tishomingo, Oklahoma. Credit: Johnston County Oklahoma Sheriff's Office)

"Our prayers are with each of the families involved and our community," the local Johnston County Oklahoma Sheriff’s Office said in its own statement, sharing photos of skid marks in the area following the crash. "This is an absolute tragedy which will have life long effects."

Tishomingo Public School Superintendent Bobby Waitman said in a Facebook post that the district had "a great loss" involving students from the district’s high school.

"Our hearts are broken, and we are grieving with our students and staff," Waitman said.

The crash happened just one week after nine people were killed, including six members of a New Mexico college's golf team and their coach, in a crash in West Texas. In that crash, the National Transportation Safety Board determined that a 13-year-old boy was behind the wheel of a truck when it crossed the centerline and collided with a van carrying students from the University of the Southwest golf team.

"It was very clearly a high speed, head-on collision between two heavy vehicles," NTSB Vice Chairman Bruce Landsberg said. He added that the NTSB also determined the pickup had a blowout before the wreck.

"It appears, at this point in the investigation, that the left front tire, which was a spare tire, had failed which resulted in the vehicle pulling hard to the left and crossing into the opposing lane," Landsberg said.