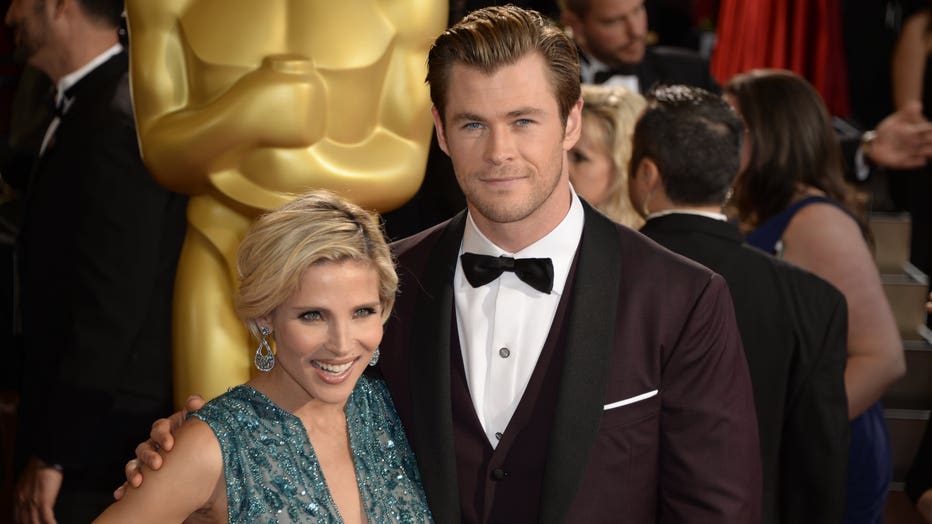 (CNN) -- When you're talking about Chris Hemsworth being named People magazine's new Sexiest Man Alive, don't make the mistake of calling him "that guy from 'The Hunger Games.'"

No, Chris Hemsworth is the ripped Australian actor who's made a name for himself as the hammer-wielding Thor in Marvel's blockbuster movies. The Hemsworth who does star in "The Hunger Games" franchise is actually Hemsworth's younger brother, Liam.

While the two siblings have competed for a role once before -- they actually both auditioned to play Marvel's Norse god, with Liam being a serious contender -- there's no beef between them about Chris landing at the top of People magazine's "sexy" list.

"Liam's been good; we've been throwing sexy looks back and forth all week," Hemsworth, 31, said on "Jimmy Kimmel Live" Tuesday, where his People magazine cover was revealed. "He's been a real team player."

And what does Hemsworth himself think of his sexy status?

"I'm most excited about the 'alive' portion of that statement," Hemsworth joked. "The sexy is a bonus, and I'm flattered."

Aside from his hotness, here are a few other things you should know about the star:

Before he was Thor, he was a TV star Down Under

Chris Hemsworth earned his first acting credit in 2002, and in 2004 he landed the role of Kim Hyde on the Australian soap opera "Home and Away." After starring on the series for three years, Hemsworth moved on to the big screen, landing a part in J.J. Abrams' 2009 "Star Trek" as George Kirk.

There are two Hemsworth siblings that are currently dominating our movie screens, but there's actually a third Hemsworth brother, Luke. He's the eldest, and is three years older than Chris.

"We grew up surfing and stuff," Liam, 24, told Details magazine of their upbringing in Melbourne, Australia. "That's why we can laugh (at the movie industry). This business is ridiculous."

Just as Chris Hemsworth's reputation as Hollywood's newest heartthrob was taking off, he settled down and tied the knot with Spanish actress Elsa Pataky in 2010.

When his wife learned that she's married to the "Sexiest Man Alive," she thought "it was pretty funny," Hemsworth told People. "We had a good laugh about it."

Perhaps that's because, in the Hemsworth household, Pataky still reigns as "the sexiest thing in the world," Hemsworth said.

Chris and Elsa have been steadily building a family since they wed in 2010. In 2012, the couple welcomed their first child, daughter India Rose, and in March 2014 they added twin boys to their brood.

With his movie commitments, Hemsworth has admitted that it isn't easy balancing fatherhood with his superhero duties. "It makes it harder and harder to leave and go to work," he told People of being a dad last year. "I enjoy being at home a lot more than I ever have."

He's not only about Marvel movies

Between that demanding schedule, Hemsworth is squeezing in other dramatic work. In 2013, he starred as British race car driver James Hunt in "Rush," and in 2015 he'll appear in Ron Howard's action adventure, "In the Heart of the Sea," and a comedy called "Vacation."