SEATTLE -- If the clouds and recent heavy rains didn't alert you, this is landslide season. Washington tops the list of states that are most prone to landslides.

While it's nearly impossible to survive a slide once it's headed your way-- Mother Nature almost always gives clues on how to spot those signs to get out before it's too late. Each new storm brings new risks.

"It is absolutely landslide season here in the Pacific Northwest," says Kathy Troost. She works in the Earth and Space Sciences Department at the University of Washington. She also is with GeoMap NW, which is trying to track the most hazardous hillsides in Western Washington. Heavy rain is the first thing to take note of. And we've certainly had more than our fair share of precipitation in the region since the month began. "Most landslides are triggered by rains. So, the more rain we get, the higher the risks gets. The closer we get to having landslides."

The second sign of a future landslide is paying attention to where water goes. Is it pooling in an unusual location? Is it coming out of a crack or spring in the ground? If you're answering yes, you might have a problem on your hands, according to Troost. "That could indicate that there’s been some sort of change with the land itself."

The third is cracks in the ground that are new. The most ominous ones run parallel to the slope and grow rather quickly. But, Troost says, because there's so little untouched ground around our homes -- any large cracks, even if they're growing perpendicular to the slope, should be something to document. Taking photos of them with something that gives them scale like a yard stick or rake can give you an accurate measure if they're growing and how fast.

A fourth thing to notice might be happening in your home. Doors that start sticking suddenly or windows that become hard to open or shut could be a sign that the land under your house is moving or shifting.

The last clue that Mother Nature lends is with the vegetation around us -- trees specifically. The kind of trees in your area can give you a clue.

"If you're on a ferry out on Puget Sound and you look and see a bluff and there's a ton of evergreens and then a spot with alders and then more evergreens. More often than not, that spot with the alders is where a landslide has taken place."  She says where the land has been disturbed, the alder tree is one of the pioneer trees that comes back first. 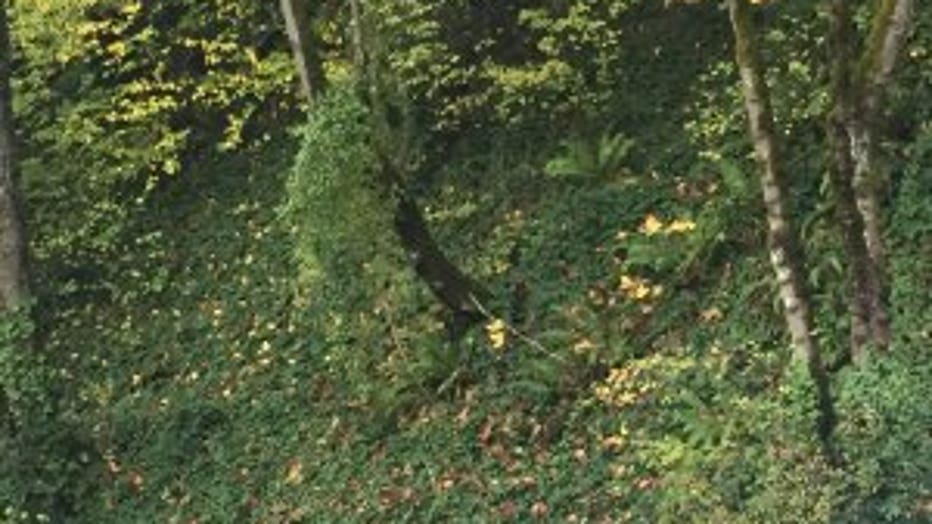 This tree with a curved base is typically a sign of a very slowly slipping hillside.

"The other thing to look for is leaning trees," says Troost. Leaning trees can indicate that a hillside is slipping quickly. And ones that are curved at the base but then grow straight upwards are typically a sign of a very slowly slipping hillside. "Trees with knees" as they're called are fairly common here since most of the scenic Western Washington landscape here is a result of landslides over the decades and centuries.