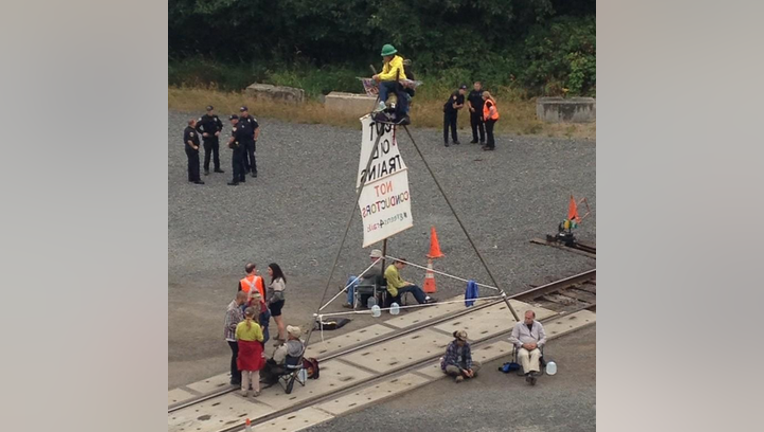 A protester sits above a large tripod as police wait to the side.

EVERETT -- Five protesters who erected a giant tripod structure above railroad tracks at the Burlington Northern Santa-Fe Rail Yard in Everett with the intention of causing an "immediate halt" to oil and coal trains in the area were arrested Tuesday afternoon.

The giant structure was confirmed by Everett police Tuesday morning. The protesters, who were on Burlington Northern property, were removed by police around 2 p.m..

It is unknown if how many trains were blocked by the tripod, though protesters claimed at least one was stalled.

Four protesters lined the base of the tripod, while another is sitting atop it. They were allowed to protest for some time, before firefighters cut the chains they attached themselves to the tripod with. Firefighters needed to assist in the removal of the woman situated atop the 25-foot tall tripod.

The protesters could face trespassing chargers.

According to a press release disseminated by those stationed around the tripod, the five area residents protesting the trains are calling on Governor Inslee to reject permits for all new fossil fuel projects in Washington, including proposed coal and oil terminals, as well as the immediate halt to shipments.

Protesters say that elected officials aren't listening to their worries.  So they take drastic measures to get their voices heard.  "This is my state.  I'm so done.  I've tried so hard, so this is just a sec on step.  I don't know what the third step is, I'd like to talk to the governor," Abby Brockway said while sitting on top of the tripod.

Protesters said the rail yard they are protesting has "become a crucial staging ground" for coal and oil trains headed to Canadian export terminals and north Washington refineries.

"Exploding oil trains running through my town are just a reminder of how out of control the fossil fuel industry really is," said Jackie Minchew, one of those at the tripod's base.

The five manning the tripod also claimed a surge in oil trains has impacted passenger rail and agricultural shipments around the country.

Similar blocking protests were recently undertaken in Seattle and north near the Tesoro Oil Refinery. 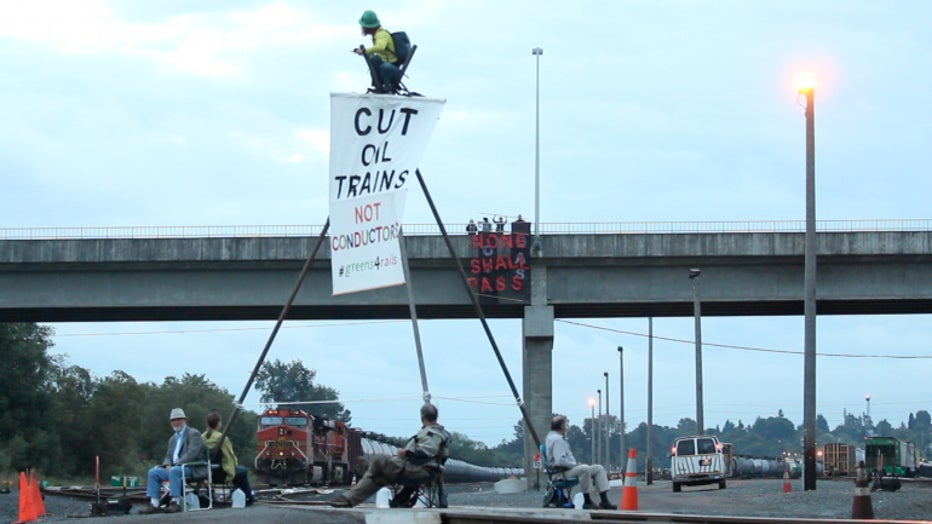 A photo of the protesters on the tripod.