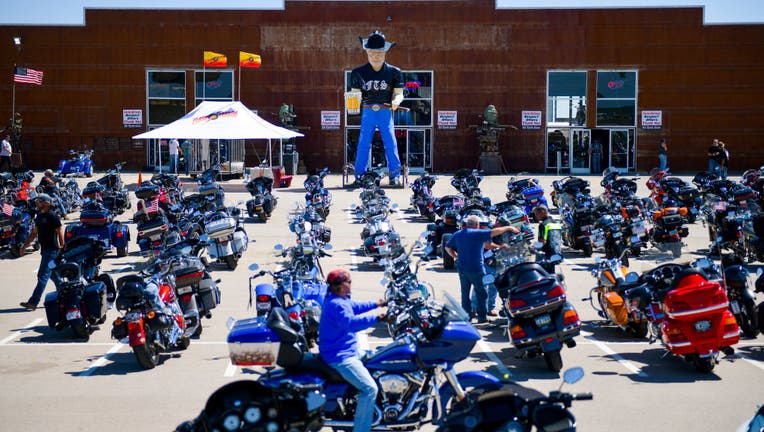 STURGIS, SD - AUGUST 09: A motorcycle rider looks for parking outside the Full Throttle Saloon during the 80th Annual Sturgis Motorcycle Rally in Sturgis, South Dakota on August 9, 2020. While the rally usually attracts around 500,000 people, officia

The count represents a decrease of nearly 8% from last year but showed that many were undeterred by the coronavirus pandemic. Sturgis officials said they expected fewer people to show up this year, estimating they would see between 250,000 and 300,000 people during the 10-day event.

RELATED: Ohio newlyweds whose wedding was canceled due to COVID-19 donate their reception food to local shelter

Most people didn't take significant precautions against COVID-19 infections at this year’s rally. A few people wore masks and some said they were avoiding crowds, but many others packed close together at bars and rock shows.

The South Dakota Department of Health issued a warning on Tuesday that one person who spent several hours at a bar on Main Street in Sturgis has tested positive for COVID-19 and may have spread it to others.

Is it safe to take public transit amid the COVID-19 pandemic?

There are steps public transit riders can take to help reduce their coronavirus risk.

With people traveling to the rally from all over the country, the mass gathering has raised concerns it could become an epicenter of infections that are hard to track, but spread quickly as rallygoers travel home.

The city releases an estimate of rally turnout after the event every year, based mostly on the weight of the trash generated. Last year, the estimate tracked closely with the number of vehicles counted: 499,654 vehicles entered Sturgis, and city officials estimated 490,000 people came to the rally.

Anniversary rallies, like this year’s 80th, usually attract larger crowds. In 2015, the city estimated that nearly 740,000 people came to the 75th-anniversary rally.

The city plans to conduct mass COVID-19 testing in an effort to catch outbreaks.