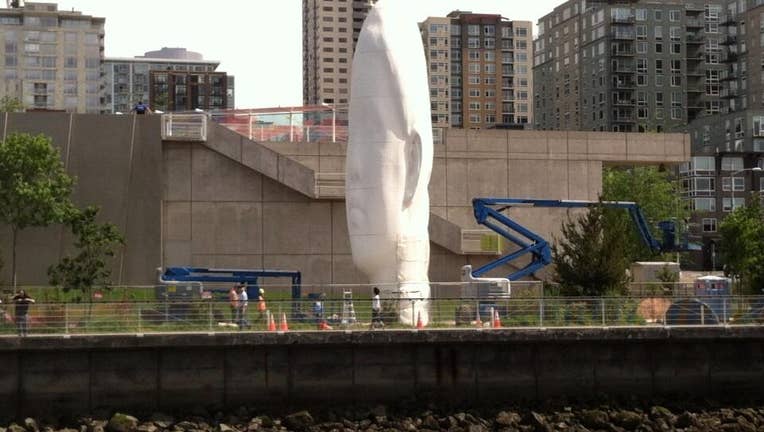 SEATTLE – The newest addition to the Olympic Sculpture Park is turning heads largely because it is a giant head.

‘Echo’ is is a 46-foot tall figurative sculpture by Spanish artist Jaume Plensa.  It now resides along the shoreline of the park after it was given to the Seattle Art Museum from the collection of Barney A. Ebsworth.

"Echo will be a spectacular and iconic new addition to the park and Seattle’s waterfront," said Kimerly Rorschach, the Illsley Ball Nordstrom Director of SAM. "This is an incredible gift to the city from Barney Ebsworth and Echo will become a beacon for the hundreds of thousands of visitors to the park each year."

The sculpture was modeled on the 9-year-old daughter of a restaurant owner near Plensa’s studio in Barcelona.  The artist used computer modeling to elongate and abstract the girl’s features.
As for its name, Plensa said it references the mountain nymph is Greek mythology.

As told in Ovid’s Metamorphoses, Echo offended the goddess Hera by keeping her engaged in conversation, and preventing her from spying on one of Zeus’s amours. To punish Echo, Hera deprived the nymph of speech, except for the ability to repeat the last words of another. Plensa created this monumental head of Echo, listening with her eyes closed or in a state of meditation. The artist envisions Echo to look out over Puget Sound in the direction of Mount Olympus