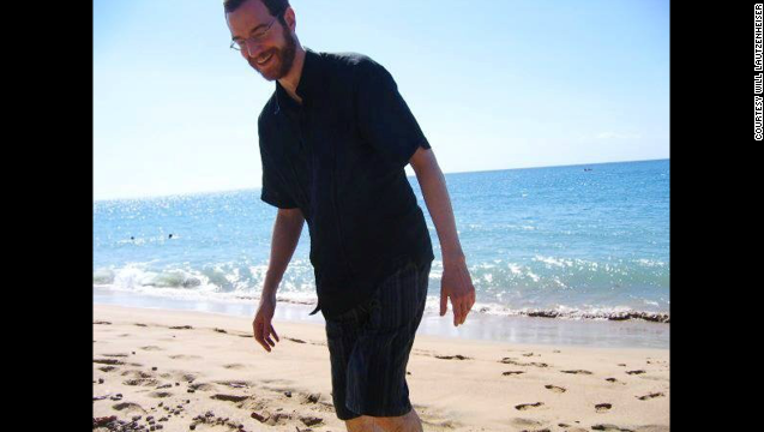 (CNN) -- A 40-year-old quad amputee was all thank you's at a news conference Tuesday at a Boston-area hospital as he showed off his two new arm transplants.

Will Lautzenheiser sat next to the doctors from Brigham and Women's Hospital who spent almost nine hours in surgery with him last month.

"To have come here and to have received this gift is really astonishing to me, and it's obviously life changing," he said.

Lautzenheiser, a former professor of film production and screenwriting, lost his limbs in 2011 after a battle with a severe streptococcal infection, according to the hospital.

The arms came from an anonymous donor through the New England Organ Bank, the hospital said.

"Of course I want to thank, to acknowledge and to honor the memory of the man whose arms I have so gratefully received," Lautzenheiser said. "This person who's anonymous to me will always be as close to me as my own skin now."

In an anonymous statement, the family of the donor said, "Our son gave the best hugs, we pray that you make a wonderful recovery and that your loved ones will be able to enjoy your warm embrace."

While his doctors said it may be years until he will be able to actually move his hands in complex ways, Lautzenheiser said he was astonished at his progress.

"This is about it so far," Lautzenheiser said, laughing and slightly stretching his arm, which was in a splint and cast, "but I had nothing, so even that is incredible."

There have been about 70 hand transplants to date around the world, according to Dr. Simon Talbot, one of the surgeons on the team that performed the operation on Lautzenheiser.

In 2013, an Iraq War vet who lost his limbs overseas underwent a successful double-arm transplant surgery at Johns Hopkins Hospital in Baltimore.