MANILA, Philippines (AP) - A Philippine air force C-130 aircraft carrying combat troops assigned to fight Muslim militants crashed and exploded while landing in the south Sunday, killing at least 42 army soldiers on board and three civilians on the ground in one of the worst disasters in the air force’s history.

At least 49 other soldiers were rescued with injuries and survived the fiery noontime crash into a coconut grove outside the Jolo airport in Sulu province, including some who managed to jump off the aircraft before it exploded and was gutted by fire, military officials said. Three of seven villagers who were hit on the ground died.

The aircraft had 96 people on board, including three pilots and five crew while the rest were army personnel, the military said, adding only five soldiers remained unaccounted for late Sunday. The pilots survived but were seriously injured, officials said.

The Lockheed C-130 Hercules was one of two ex-U.S. Air Force aircraft handed over to the Philippines as part of military assistance this year.

The aircraft originally took off from Manila with only a few passengers, including a two-star army general, Romeo Brawner Jr., who disembarked with his wife and three children in Cagayan de Oro city, where he's set to become the new military regional commander on Monday. The army troops then boarded the C-130 in Cagayan de Oro for the flight to Sulu.

Brawner said he was stunned to learn that the plane he'd just flown on had crashed. 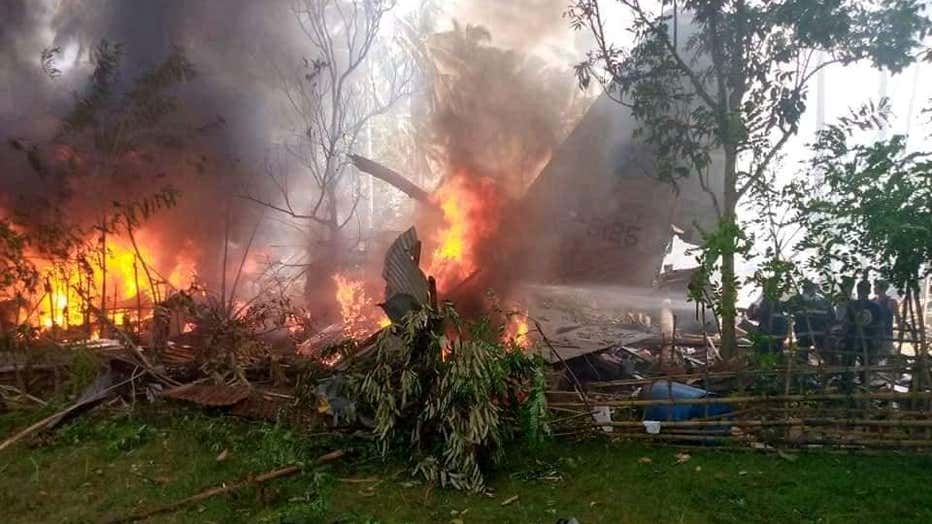 The Philippine military says at least 31 people have been killed and 50 rescued after a C-130 aircraft carrying combat troops crashed while landing in a southern province. (Credit: Pondohan TV via Storyful)

"We’re very thankful that we were spared, but extremely sad that so many lost their lives," Brawner told The Associated Press.

Officials said the injured personnel were brought to a hospital in Sulu or flown to nearby Zamboanga city, and troops were continuing to search for the missing. "A number of soldiers were seen jumping out of the aircraft before it hit the ground, sparing them from the explosion caused by the crash," a military statement said, citing witnesses.

Initial pictures released by the military showed the tail section of the cargo plane relatively intact. The other parts of the plane were burned or scattered in pieces in a clearing surrounded by coconut trees. Soldiers and other rescuers with stretchers were seen dashing to and from the smoke-shrouded crash site, where a dark gray smoke billowed shortly after impact.

The plane was transporting troops, many of them new soldiers who had just undergone basic training, from the southern Cagayan de Oro city for deployment in Sulu, officials said.

"They were supposed to join us in our fight against terrorism," Sulu military commander Maj. Gen. William Gonzales said. Government forces have been battling Abu Sayyaf militants in the predominantly Muslim province of Sulu for decades.

It was not immediately clear what caused the crash. Regional military commander Lt. Gen. Corleto Vinluan said it was unlikely that the aircraft took hostile fire, and cited witnesses as saying that it appeared to have overshot the runway then crashed on the periphery of the airport.

Military chief of staff Gen. Cirilito Sobejana told reporters that "the plane missed the runway and it was trying to regain power but failed and crashed."

An air force official told The AP that the Jolo runway is shorter than most others in the country, making it more difficult for pilots to adjust if an aircraft misses the landing spot. The official, who has flown military aircraft to and from Jolo several times, spoke on condition of anonymity because of a lack of authority to speak publicly.

Initial pictures showed that the weather was apparently fine in Sulu, although other parts of the Philippines were experiencing rains due to an approaching tropical depression. The airport in Sulu’s main town of Jolo is located a few kilometers (miles) from a mountainous area where troops have battled Abu Sayyaf militants. Some militants have aligned themselves with the Islamic State group.

The U.S. and the Philippines have separately blacklisted Abu Sayyaf as a terrorist organization for bombings, ransom kidnappings and beheadings. It's been considerably weakened by years of government offensives but remains a threat.

President Rodrigo Duterte expanded the military presence in Sulu to a full division in late 2018, deploying hundreds of additional troops, air force aircraft and other combat equipment after vowing to wipe out Abu Sayyaf and allied foreign and local militants.

Government forces at the time were pursuing Muslim armed groups a year after quelling the five-month siege of southern Marawi city by hundreds of militants linked to the Islamic State group. More than 1,000 people, mostly militants and long-elusive Abu Sayyaf commanders, were killed in months of intense air and ground assaults.

Sunday’s crash comes as the limited number of military aircraft has been further strained, as the air force helped transport medical supplies, vaccines and protective equipment to far-flung island provinces amid spikes in COVID-19 infections.

The Philippine air force has a history of tragic disasters. One of its aircraft crashed in a rice field north of Manila in 1971, killing 40 military personnel. A recently delivered S-701 Blackhawk helicopter crashed more than a week ago near Clark freeport, a former U.S. air base, killing all six air force personnel on board.

The Philippine government has struggled for years to modernize its military, one of Asia’s least equipped, as it dealt with decades-long Muslim and communist insurgencies and territorial rifts with China and other claimant countries in the South China Sea.