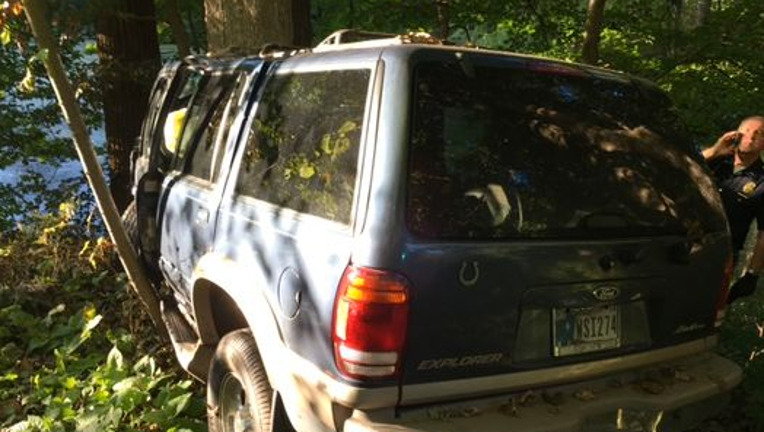 Kevin Bell's SUV plunged down an embankment in Indiana on Saturday and slammed into a tree. His girlfriend, Nikki Reed, was killed. He escaped the wreck three days later. (Indiana State Police)


A Pennsylvania man seriously injured in a crash that killed his girlfriend was trapped in the SUV with her body for three days before he was able to crawl from the wreckage and seek help, reports the Cincinnati Enquirer.

Kevin Bell, 39, lost control of his Ford Explorer on a road in southeast Indiana, state police said. The SUV slid down a steep embankment and slammed into a tree.

Nikki Hobbs Reed, 37, died instantly. Trapped and suffering leg injuries, Bell stayed with her body until Tuesday afternoon, when he managed to crawl to the road and hoist himself over a guardrail, reports the Courier-Journal. He was spotted by a passing motorist, who called police around 5 p.m.

Reed's family in Indiana reported her missing on Sunday, after she failed to show up to her son's birthday party on Saturday afternoon,  according to WHAS.

"The family didn't have a clue what happened for two or three days," said a state police spokesman. Both people in the car had phones; it was unclear whether they were working.

A police investigation is continuing. Reed's daughter told WHAS that her mother left Friday morning for Dover, Pa., to pick up Bell and was expected back home by 2 p.m. Saturday.

Brooklyn Reed said she last spoke to her mom in the early afternoon. "She said she was in Kentucky, so I didn't think anything of it," she said.

But when Brooklyn Reed called her back, there was no answer. "So many people lost an amazing woman in a blink of an eye," Nikki Reed's best friend, Kristie Bevers, wrote on Facebook.