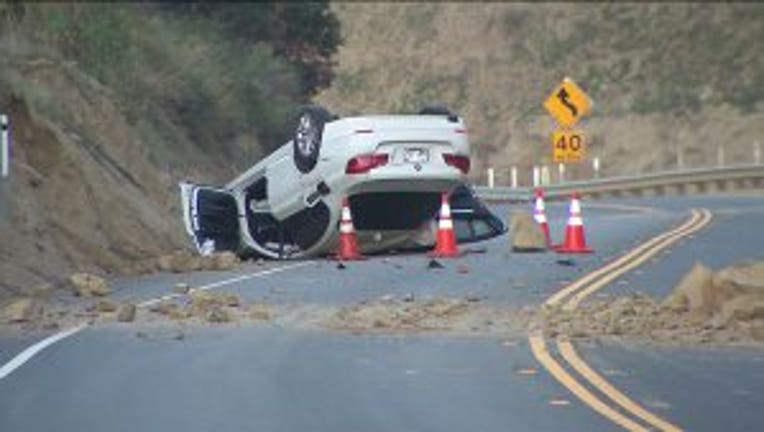 LA HABRA, California (KTLA) - Southern California residents felt more shaking Saturday morning as dozens of aftershocks continued to hit the area following a magnitude-5.1 earthquake.  A 3.4 magnitude aftershock hit the area near La Habra, according to the U.S. Geological Survey.  The temblor occured at 9:02 a.m. PDT at a depth of 0.6 miles, the USGS reported.
The temblor hit at approximately 9:09 p.m. Friday night, according to the United States Geological Survey. It was centered 1 mile east of La Habra at a depth of 4.6 miles.

It also triggered a rock slide that caused a car to overturn, according to the Brea Police Department. No one was reported injured, but the car remained overturned in the same spot Saturday morning, video from the scene showed.


The temblor was preceded by two foreshocks, the largest of which was a 3.6-magnitude earthquake at 8:03 p.m., the USGS reported.

Nearly 30 aftershocks were reported in the hour following the quake, according to the Southern California Seismic Network.

The largest aftershock from the earthquake was a magnitude-3.6 that struck around 9:30 p.m., according to the USGS. Another larger one with a magnitude of 3.4 hit Saturday morning.

Caltech seismologist Dr. Kate Hutton said the number of incidents was expected for an earthquake of that magnitude.

“You might have the foreshock, you might not. In this case there was one. And there should be aftershocks after the earthquake. It’s a continuation of strain release,” she said.

The epicenter was not “on an obvious fault,” Hutton added.

Seismologists said that there was also a 5 percent chance that it was a precursor to a bigger quake.