A pasta dish that has more than a day's worth of calories and a pizza with more than three-days worth of saturated fat are just two of the meals featured in the 2017 Xtreme Eating Awards.

The annual awards were announced by the Center for Science in the Public Interest on Friday and published in the group’s latest Nutrition Action Healthletter. Each meal is given an award-themed title like "Worst Cocktail Design" or "Worst Adapted Pasta.

“Leave it to America’s chain restaurant industry to market a stack of pancakes as a side dish, or to lard up quesadillas and pasta with pizza toppings, or to ruin a perfectly good sweet potato,” said CSPI senior nutritionist Lindsay Moyer.

And the awards go to: 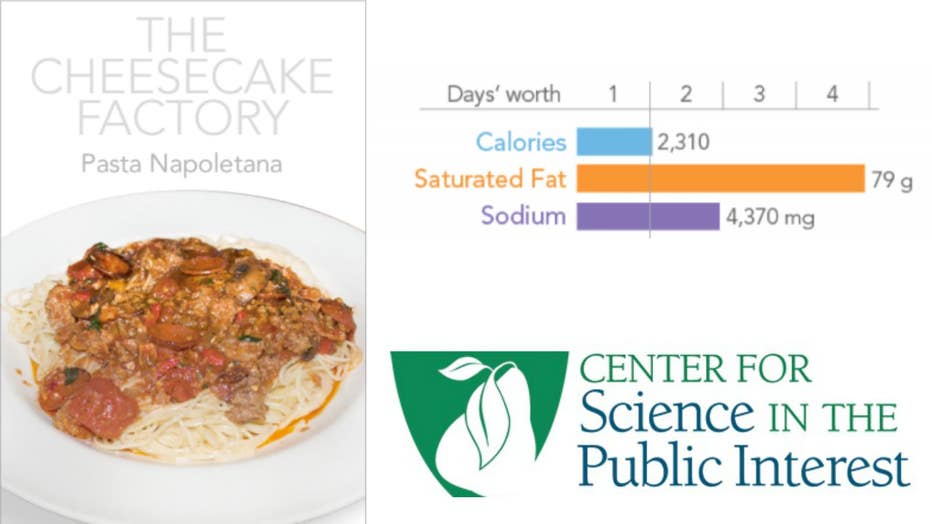 "With 2,310 calories, 79 grams of saturated fat, and 4,370 mg of sodium, the dish is like eating a Pizza Hut Meat Lover’s Personal Pan Pizza topped with three cups of pasta and a cup of heavy cream." - CPSI 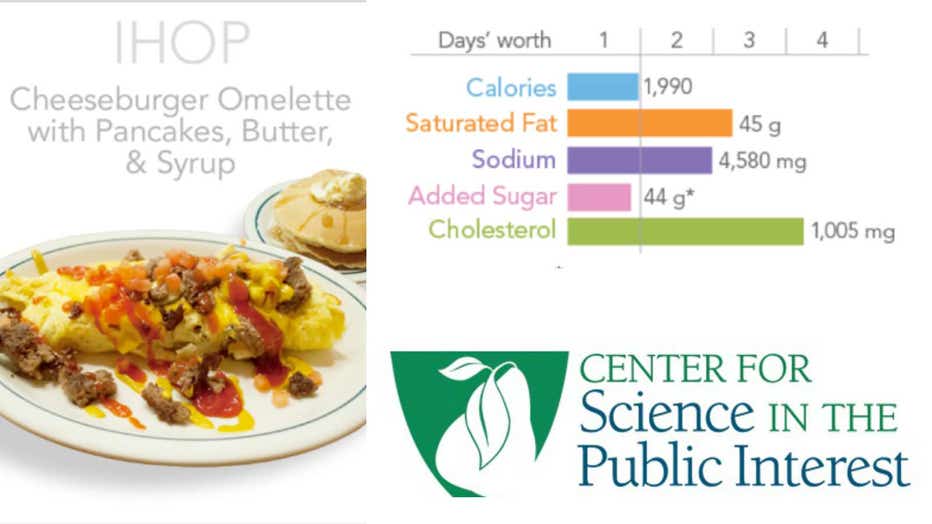 "When you go with 3 Buttermilk Pancakes (with butter and syrup) as your side, the breakfast has 1,990 calories, 45 grams of saturated fat, 4,580 mg of sodium, and an estimated 44 grams of added sugar." - CPSI

Editor's note: Nutritional information for this item can be viewed on IHOP's official website.

Most Damage from a Supporting Vegetable 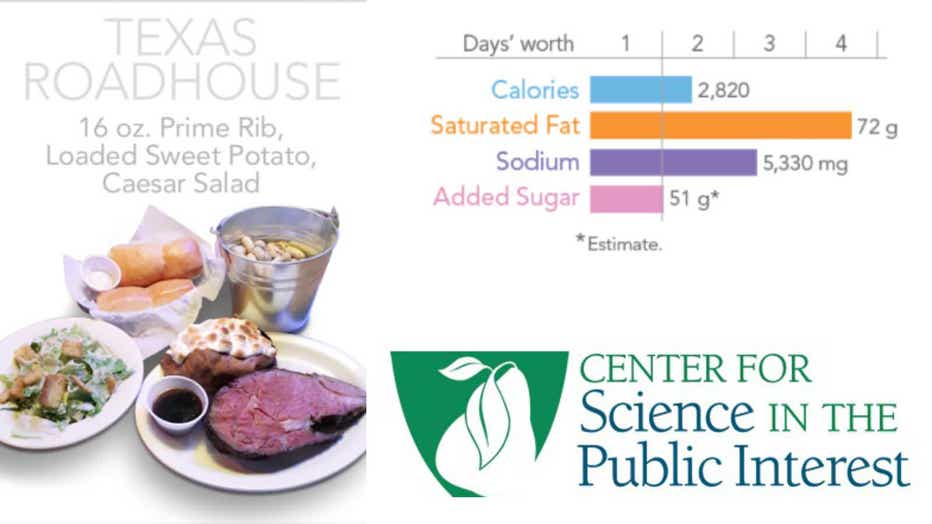 "By itself, the massive 16 oz. Prime Rib at Texas Roadhouse has 1,570 calories.  That’s before you choose your two sides.  One of them—for an extra 99 cents—is a doozy.  CSPI is ordinarily a fan of sweet potatoes, but the Roadhouse’s Loaded Sweet Potato (770 calories) comes entombed under a pile of mini marshmallows and caramel sauce." CPSI

Editor's note: Nutritional information for this item can be viewed on the official Texas Roadhouse website. 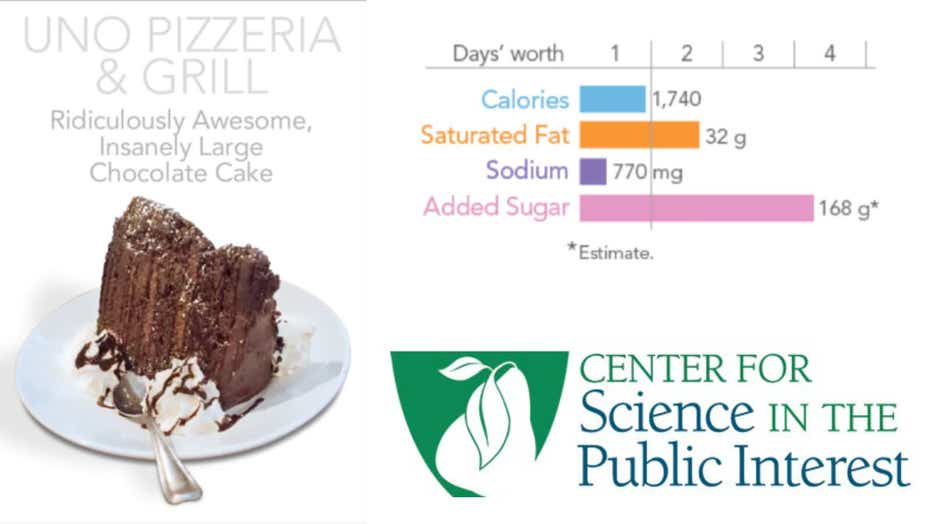 Editor's note: Nutritional information for this item can be viewed on the official UNO Pizzeria & Grill website. 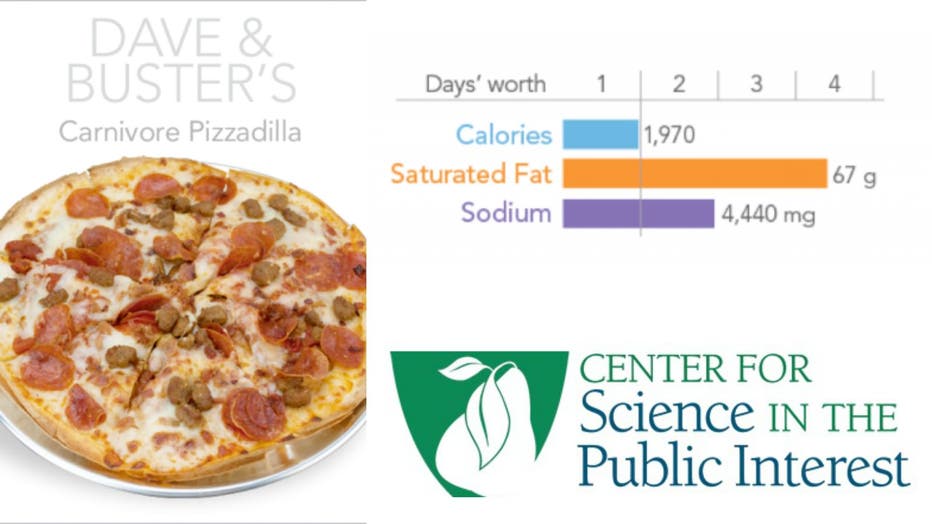 "To your arteries and waistline, a Carnivore Pizzadilla looks like 100 slices of pepperoni layered atop two Taco Bell Cheese Quesadillas, or half a stick of butter melted over three McDonald’s Quarter Pounders with Cheese. Mmm..."' - CPSI

Editor's note: Nutritional information for this item can be viewed on the official Dave & Buster's website.

Some of the other "winners" include "Worst Cheese in a Leading Role" and "Worst Visceral Effects". To view the full list, visit cspinet.org/xtreme-eating-2017.

The FDA is currently accepting public comments regarding a decision to delay menu labeling. Food retailers are pushing for legislation that would allow companies to use "arbitrary serving sizes" and allow pizza chains to avoid disclosing calories on menu boards, according to the CPSI.