BERLIN (AP) - Cristiano Ronaldo and Lionel Messi are among a handful of players hoping for a final hurrah in what is likely to be their last World Cup appearance.

Hanging on for the next World Cup in 2026 in North America might just be a step to far for these veterans.

Perhaps ominously for Portugal’s Group H rivals, the 37-year-old Ronaldo has endured a frustrating season so far at Manchester United and will be eager to show what he can do in Qatar. Ronaldo is already the all-time top-scorer in men’s international soccer with 117 goals and has made a Portuguese record 191 appearances. The five-time five Ballon d’Or winner has scored goals wherever he has played, whether in his first stint at United, in a trophy-laden spell at Real Madrid or in helping Juventus win two Serie A titles before his return to the Premier League. However, his return has not gone as he would have liked so far this season. Ronaldo has been restricted to only one goal in nine Premier League appearances — most of those as a substitute.

So much of Argentina’s hope is pinned on the little artist from Rosario. The 35-year-old Messi has eclipsed Ronaldo with seven Ballon d’Or titles, all but the last of those coming for his outstanding play while at Barcelona. Now with Qatari-backed Paris Saint-Germain, Messi missed out on the 30-man shortlist for the 2022 Ballon d’Or award. Messi, however, has regained his form this season. He came close to winning the World Cup in 2014 when Argentina reached the final, but so far his only major international title has been the 2021 Copa América.

The 34-year-old Lewandowski perhaps never got the credit he deserved in the shadow cast by Messi and Ronaldo. Lewandowski quietly kept scoring goals for Borussia Dortmund, then Bayern Munich, where he racked up 312 goals in 384 appearances before his recent switch to Barcelona. Lewandowski is Poland’s undisputed leader, the team captain and record scorer with 76 goals in 134 appearances, including nine goals during qualifying for the World Cup. Lewandowski has yet to score at a World Cup. In his only previous World Cup tournament in 2018, Poland was eliminated from the group stage.

Uruguay’s all-time leading scorer with 134 goals, the 35-year-old Suárez is set to play at his fourth World Cup tournament. It will be his first while playing back with boyhood club Nacional in the Uruguayan capital of Montevideo after a storied career that wasn’t without controversy at Ajax, Liverpool, Barcelona and Atlético Madrid. Suárez was sent home from the 2014 World Cup for biting Italy defender Giorgio Chiellini on the shoulder during a group game. Suárez helped Atlético win the Spanish league title in his first season with the club in 2021, staying another season before he returned to Nacional. He dueled with Ronaldo when they were playing for Barcelona and Real Madrid, respectively, and the old rivals are scheduled to meet again when Uruguay plays Portugal at Lusail Stadium on Nov. 28. 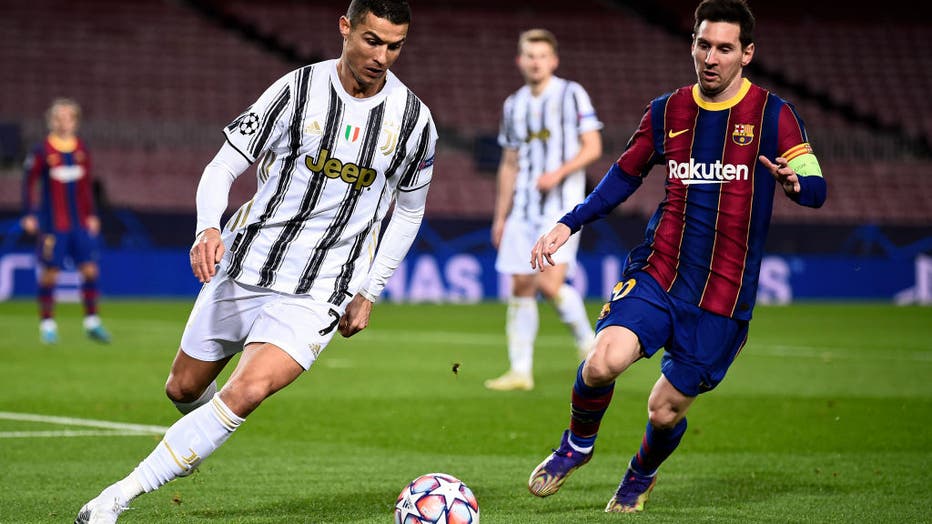 The 37-year-old Modrić is one of those players who seems to be getting better with age. Now in his 10th season with Real Madrid, Modrić played a key role in a decade of success for the Spanish club, winning five Champions League titles and three league titles in that time. He also won the Ballon d’Or in 2018 in the first occasion since 2007 that it wasn’t won by Messi or Ronaldo. For Croatia, he’s just as important — the all-seeing controller in midfield, the driving force that helped the team reach the World Cup final in 2018. Although Croatia lost to France in that final four years ago, Modrić was still awarded the Golden Ball for the best player at the tournament. This will be his fifth World Cup tournament.

One of the best attacking right backs ever to play the game, the 39-year-old Alves is determined to finish his international career on a high, particularly after missing the last World Cup because of a knee injury. Alves has only played in two World Cups, in 2010 and 2014. He came to prominence with lightning runs up and down the right side of the field in a successful spell at Sevilla before moving to Barcelona in 2008. He spent eight trophy-laden years at the Catalan club before spells at Juventus and Paris Saint-Germain, then São Paulo, before a return to Barcelona last year. He joined Mexican club Pumas this year.

The 36-year-old Neuer is undoubtedly one of the best goalkeepers to have emerged from Germany, a country that has been spoiled with talent over the years with the likes of Oliver Kahn, Jens Lehman, Harald Schumacher and Sepp Maier. Despite the strength of rivals like Barcelona’s Marc-André ter Stegen or Eintracht Frankfurt’s Kevin Trapp, Neuer has maintained his No. 1 status since claiming the spot at the 2010 World Cup. The Bayern Munich captain was voted goalkeeper of the tournament when Germany won in 2014. This year's tournament will be his fourth World Cup.

The 33-year-old Müller scored five goals at the 2010 World Cup and has been an almost ever-present for Germany and Bayern Munich since. He was briefly dropped by Joachim Löw in 2019 in the then-Germany coach’s ultimately unsuccessful shakeup of the team after its poor World Cup showing in 2018 as defending champion, but Müller was recalled for last year’s European Championship and has established himself as a leader. When not scoring goals in typical Müller fashion — he has always had an uncanny knack for being in the right place at the right time — Müller can be seen encouraging his teammates and passing on tips and advice to younger players.