The criminal charges are historic in Washington state.

TACOMA, Wash. - Two Tacoma police officers have been charged with second-degree murder for the death of Manuel "Manny" Ellis and a third officer has been charged with first-degree manslaughter, Attorney General Bob Ferguson announced Thursday.

All three officers were booked into the Pierce County Jail by Thursday evening, according to the jail roster. They were expected to make their first appearance in court Friday morning. 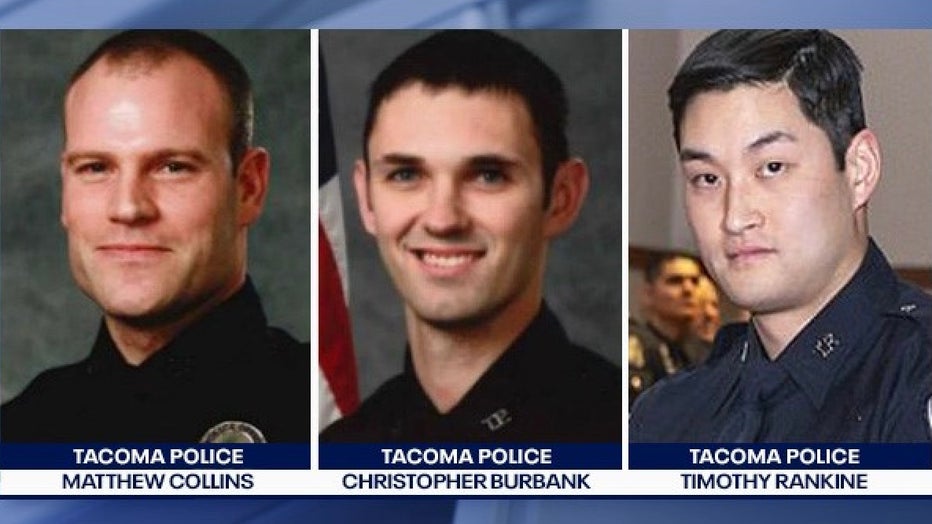 Charges were not announced for Masyih Ford and Armando Farinas, the two other officers who were under investigation.

The three officers charged in Ellis's death are still on paid administrative leave, according to the Tacoma city manager.

Ferguson said it's the first time the AG's office has criminally charged police officers for use of deadly force - and the second time homicide charges have been filed in Washington against officers since voters approved Initiative 940 in November 2018. You can read the evidence from the AG's office in court documents below:

Attorney James Bible said Ellis's family "has waited 14 months to find out if the state will prosecute Manny's killers."

"The wait has been difficult," he said.

At a news conference Thursday, Ellis’ family welcomed the charges but called for more work to overhaul the criminal justice system. The family is seeking $30 million in a lawsuit against the city.

Manuel's mother Marcia Carter-Patterson said her son was "used as a sacrifice" but said he "didn't have to be murdered."

"The criminal system needs to be made over, from the head — just take it all off," she said. "This is about Manuel Elijah Ellis. This is his work. So help us with it."

Manuel Ellis’ mom: ‘My son was used as a sacrifice’

At the intersection of 96th and Ainsworth where Manny died, many people visited the spot, which now has a memorial in the front yard of a home called "Manny's Garden."

Brenda Ballis - whose nephew was best friends with Manny - visited the memorial Thursday to reflect on the day's announcement.

Adrian Cole, who lives not far from the memorial, stopped by the area to pay his respects. Cole says he is hopeful the charges against the officers will bring more change in the future.

"It’s a small step towards a giant step. So until there is more action seen, I have the mindset that I’m still going to keep my guard up and I’m still going to be aware of what’s going on around me because I’m not trying to be that person. And it sucks that Manny had to be the one who was a martyr for this cause," said Cole.

Close family friends of Manuel 'Manny' Ellis remember the man killed by police last years. This comes as three Tacoma officers were charged in the death of Ellis last year.

Gov. Jay Inslee, in a prepared statement, called the charges "the first step in our system of justice."

"We must remain proactive – from those of us in elected office to those providing services in our communities – to turn the tide of injustice," he said.

"The charges being brought against three of the officers on the scene the night of Manuel Ellis’s death will no doubt be received with strong emotions across our community. For many, this news will be welcomed. For others, this news will be deeply troubling and difficult to bear. And for more still, the news may prompt any number of mixed emotions. It will no doubt intensify questions about the safety of Black lives here in the City of Tacoma.

"The truth, no matter where you might stand on the Attorney General’s decision, is that Manuel Ellis was a son, a brother, a father, a churchgoer, and a friend to many. The loss of his life is tragic and heartbreaking. And losses of Black lives specifically impact our friends, families, neighbors of color – and me."

"My job today is to work with our Chief to begin our administrative review process.

"This is a solemn duty. We undertake this responsibility mindful that more process can lead to more pain and confusion for many in the community.

"My commitment is to continue to do our work in a way that maintains the integrity of the criminal process, and to be responsive to the need to be both thorough and efficient. We will share what we can – as soon as we can – as we move through our process steps, ensuring that these next critical steps do not preclude accountability but, by working closely with the Chief, we ensure that our process is part of the path to accountability."

The Tacoma Police Union issued the following statement in response to the charges:

"We are disappointed that facts were ignored in favor of what appears to be a politically motivated witch hunt. We look forward to trial. An unbiased jury will find that the officers broke no laws and, in fact, acted in accordance with the law, their training, and Tacoma Police Department policies. An unbiased jury will not allow these fine public servants to be sacrificed at the altar of public sentiment. Like every community member, our officers are presumed innocent until proven guilty."

Retired Sheriff John Urquhart says in this day and age of policing the charges do not surprise him.

The decision comes more than 14 months after Ellis died while in police custody and galvanized calls for justice, new police accountability laws and protests in Western Washington.

Ellis, 33, was walking home from a convenience store on March 3, 2020, when Tacoma police said they saw him trying to get inside a car as it made a turn.

Police said Ellis charged at one officer, lifted him up and violently threw him to the ground, but video of the incident filmed by two witnesses contradicted the police narrative.

Witness video shows Ellis repeatedly telling officers "I can't breathe" as they put him in a chokehold and placed a spit hood over his head.

The autopsy report was released in June, the same week protests erupted around the world in response to the death of George Floyd in Minnesota.

The Pierce County Sheriff’s Department was initially handling the investigation, but Inslee assigned the case to a special investigative team in June after it became public that a deputy from the sheriff’s office was at the scene the night Ellis died.

Four Tacoma officers were placed on paid leave in June when the autopsy report was released: Matthew Collins and Christopher Burbank, who are white; Masyih Ford, who is Black; and Timothy Rankine, who is Asian-American. A fifth Tacoma officer, Armando Farinas, has since been placed on leave.

Sanders was not placed on leave, the sheriff's department said.

Tacoma Mayor Victoria Woodards has repeatedly called for the officers involved to be fired.

Ellis' death - and the investigation that followed - have drawn attention to gaps in Washington’s police accountability law and inspired what Inslee has called the "most comprehensive" police reform laws in the nation.

The dozen bills Inslee signed May 18 include outright bans on police use of chokeholds - like the one officers put Ellis in the night he died - neck restraints, and no-knock warrants like the one that helped lead to Breonna Taylor’s killing in Louisville, Kentucky.