Two suspects were seen on on surveillance stealing a local contractor's truck.

SEATTLE - A truck stolen by two thieves Sunday afternoon in North Seattle was recovered Monday morning in Auburn. Kirk Petterson says the thieves damaged the ignition on his truck, ransacked it and stole all of his tools. 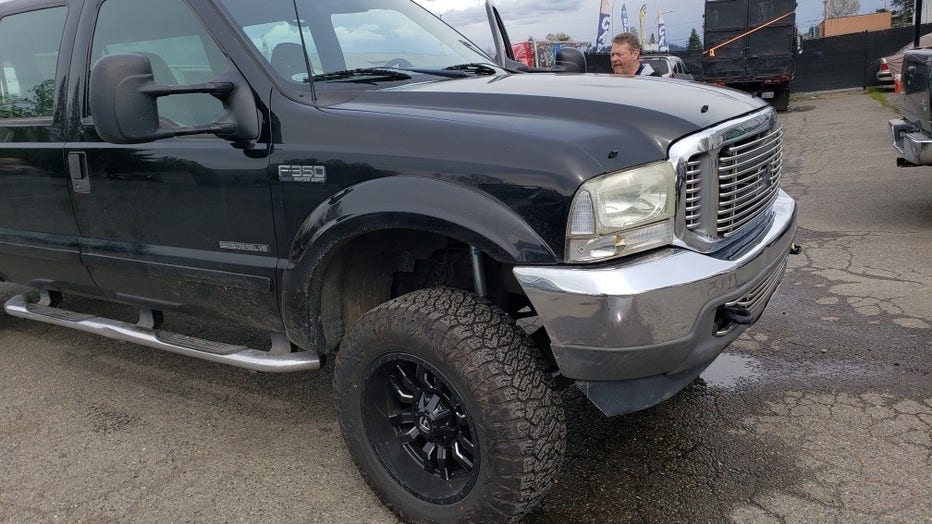 A father and daughter were spending Sunday afternoon hitting golf balls at the driving range when two thieves stole their pickup truck.

"Went from having a good time with my daughter, possibly purchasing some clubs and other merchandise to having known that my truck that was just stolen. It made me sick. I really felt like getting sick. I don't recall having a feeling like that in a long time, if ever," said Kirk Petterson.

The suspects arrived in a Sunset Gold 2001 Chevy Tahoe with an Oakland Raiders logo in the back window and WA License # BEE1735.

In surveillance video, the passenger got out of the Tahoe wearing a neon safety vest and acted as a lookout. The driver of the Tahoe then got into Petterson's black 2001 four-door Ford Super Duty F-350 with Washington license plate B21248N and stole it.

Petterson works as a contractor. He had some Dewalt tools and compressors in the backseat of his truck. Now, he can't tow his trailer and will have to figure out what to do for work this week.

Witnesses said his stolen truck was spotted several hours later in Everett. Anyone who sees it is asked to call 911 immediately.

If you can identify the suspects in the Tahoe or have any information to help Seattle Police. Please submit an anonymous tip to Crime Stoppers of Puget Sound for a cash reward of up to $1,000. It is anonymous. Text tips through the P3 Tips App on your cell phone or at P3Tips.com. You can also call 1-800-222-TIPS (8477).