St. Louis County Police Chief Jon Belmar said at least three shots were fired from northwest of the police department and two officers were hit -- one from the St. Louis County Police Department, a 41-year-old, was struck in the shoulder; the other, a 32year-old from the Webster Groves Police Department, was struck in the face.

Both were rushed in the hospital. "The are conscious," Belmar said, adding "these are very serious gunshot injuries."


Belmar says he did not know who shot the officers, but he believed they were targeted.


The shots were fired as protesters had gathered following the resignation of the city's embattled Police Chief Thomas Jackson on Wednesday.

Jackson was the sixth employee to resign or be fired after a Justice Department report cleared a white former Ferguson police officer, Darren Wilson, of civil rights charges in the shooting of black 18-year-old Michael Brown in Ferguson last summer. Wilson has since resigned. 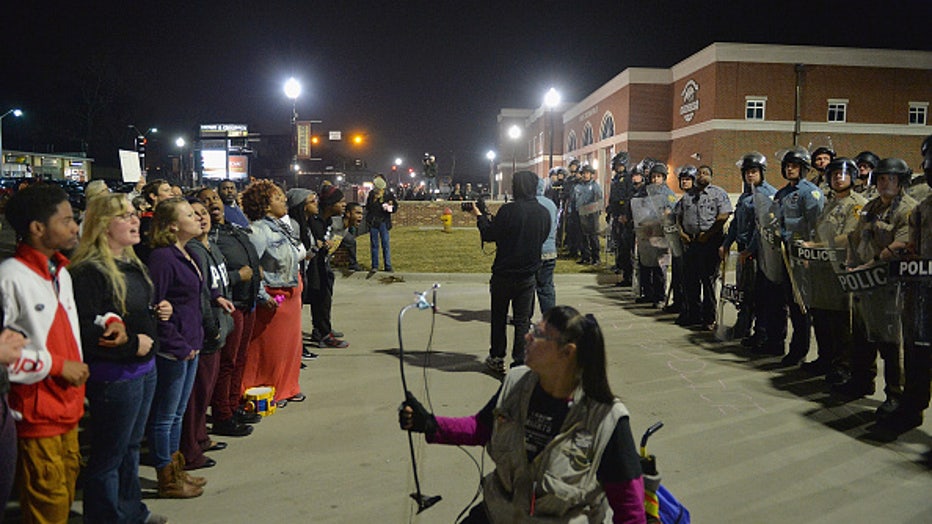 Protestors demonstrate outside the Ferguson Police Department on March11, 2015 in Ferguson, MO. Protests erupted after the announcement of the resignation of Ferguson Police Chief Tom Jackson earlier in the day. (Photo by Michael B. Thomas/Getty Imag

"All of a sudden, I heard at least 4 or 5 shots rang out," witness Markus Loehrer told CNN. "It took me at least 30 seconds of watching before I realized there was an officer down. We are not there to shoot cops, we don't like violence. So we did what anybody would do -- we ran away."

Protesters had gathered outside the Ferguson Police Department Wednesday night to cheer the resignation of the city's embattled Police Chief Thomas Jackson.

The crowd had been thinning out, ready to call it a night, when the shots rang out, tweeted Susan Weich, one of several Post-Dispatch reporters reporting from the scene.

The shots rang out as the protests appeared to be dwindling, the St. Louis Post-Dispatch said. Some of the protesters fell to the ground and others ran.

Several members of the media, including a Post-Dispatch reporter and photographer, were near the officers who were hit.

The shots appeared to come from the direction of a block of homes on Tiffin Avenue that intersects West Florissant Avenue, the Post-Dispatch said. Witnesses reported two to four shots.

The shooting brought a much larger contingent of officers, many with high-powered rifles, to the scene, the newspaper said.