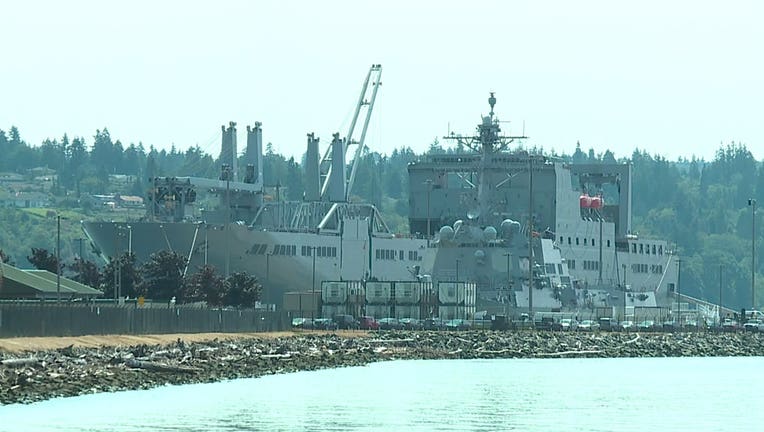 BREMERTON, Wash. - Two wells bordering Naval Base Kitsap’s southern edge have been found to have potentially harmful levels of contamination caused by a firefighting foam used on the base.

The Navy is expanding testing this fall to examine a larger area for its presence, the Kitsap Sun reported.

The results come from an initial round of water testing for perfluoroalkyl and polyfluoroalkyl substances, commonly known by their acronym, PFAS. A common chemical ingredient since the 1950s, PFAS have been found by the Environmental Protection Agency to be dangerous at certain levels in the bloodstream, raising risks for cancer and ill effects on the body’s immune and endocrine system and in human development.

Of the 292 wells sampled by the Navy in February, 83 showed some level of PFAS, the Navy said. Two wells were found to have more than 70 parts per trillion of PFAS compounds — an amount that triggers the EPA to issue a lifetime health advisory.

Residents who get water from those wells are being supplied with bottled water until the Navy can provide a permanent solution to the problem.

The Navy has hired a contractor to do the expanded testing starting in October, the Navy said. Around 400 letters have been sent to properties in that area.

The Navy believes PFAS got into the ground around the base following decades of deployment of an aqueous film-forming foam known as AFFF, used by firefighters on base for training and in emergencies. The Navy has discontinued its use in training on Bangor. PFAS are also found in items including cookware, furniture and rain jackets.

“The Navy is committed to being transparent during this testing process,” Capt. Rich Rhinehart, Naval Base Kitsap’s commanding officer, said. “We will continue to keep the public informed as new information becomes available.”