The first solar eclipse of 2022 graced southern skies this weekend.

On Saturday, April 30, people in parts of southern South America, Antarctica and the Pacific and Southern Oceans witnessed a partial eclipse, according to NASA.

As explained by NASA, a solar eclipse happens when the moon moves between the sun and Earth, casting a shadow on Earth, fully or partially blocking the sun’s light in some areas.

During a partial eclipse, the moon and sun are not perfectly aligned, so the moon does not completely cover the sun.

Videos were captured from South American countries such as Argentina and Chile showing the partial eclipse, which appears as if a "bite" has been taken out of the sun. 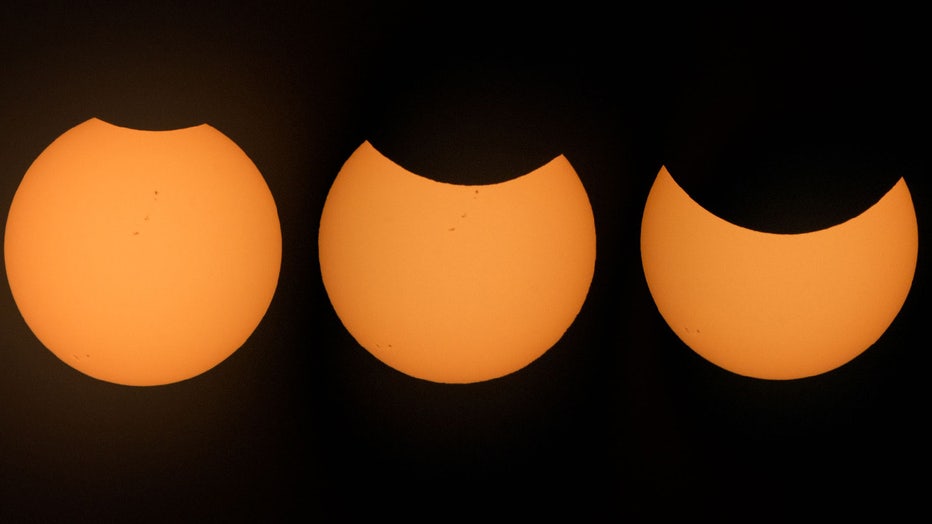 The Sun appears partially eclipsed in this series of photos taken from NASA’s Johnson Space Center in Houston on August 21, 2017. Credit: NASA/Noah Moran

Another partial eclipse is taking place later this year — Oct. 25, 2022 to be specific, according to NASA.

This one still won’t be visible in North America, though. Those in Europe, northeast Africa, the Middle East and western Asia will be privy to this particular celestial phenomenon.

RELATED: NASA says this is what caused a loud boom over Mississippi

Americans are gearing up for the next total solar eclipse, taking place on April 8, 2024.

Large parts of the country will be cast in the complete shadow of the moon that day.

The event only happens when the moon’s orbit is close to Earth, and the celestial body blocks out the view of the sun, creating a shadow on Earth’s surface.

Solar eclipses happen about twice a year but finding yourself under the totality of one is rare.

The American Astronomical Society says that any given spot on the planet only sees temporary darkness from the moon’s shadow once every 400 years.

The event in 2024 will take place during the afternoon as the eclipse will travel above Mexico, into Texas and 14 other states before exiting through Canada.

This story was reported from Detroit. FOX Weather contributed.