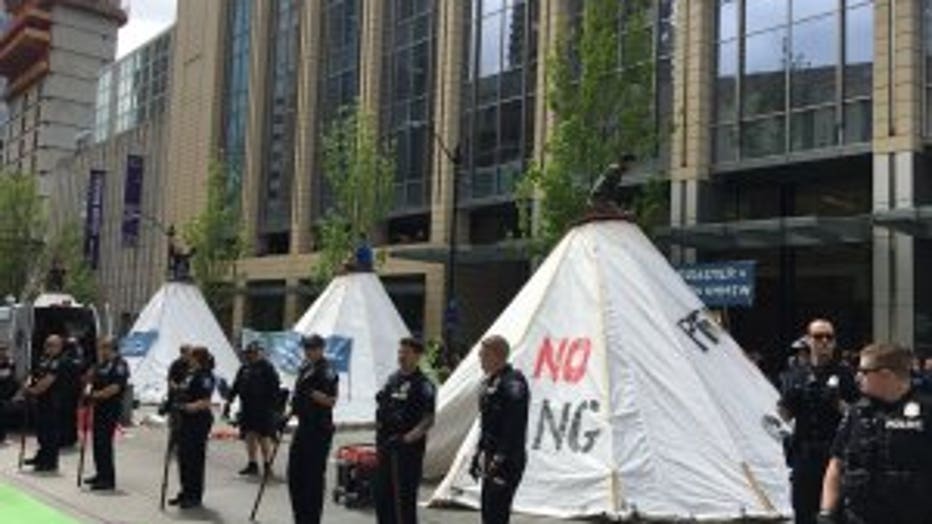 Activists sat on wooden perches at the top of the teepees Monday as police moved into the area and told them to disperse.

Other activists occupied the lobby of the Russell Investments Center to protest the tar sands investments of J.P Morgan Chase, which has an office in the building. Some lined the streets chanting and singing.

The Seattle Times reports police moved into the area and arrested 14 people after issuing a "dispersal order."

The protesters called on Chase to quit financing the Canadian tar sands production and Trans-Mountain pipeline.

According to the protesters, the bank's financial support violates indigenous rights and increases carbon emissions that contribute to climate change.

If oil is shipped through the Salish Sea, it could bring an additional 400 oil tankers each year, the protesters claim.

“JPMorgan Chase has a long history of advancing environmental sustainable solutions for clients and its own operations.  We firmly believe that balancing environmental and social issues with financial considerations is fundamental to sound risk management.  We take these issues seriously across our business, including with the Canadian oil sands.”

The demonstration was blocking all lanes of 2nd Avenue at Pike Street, according to the Seattle Department of Transportation.

"The protesters made it clear that they intended to be arrested and those who remained at the scene were arrested," the Seattle Police Department said.

A total of 14 protesters were arrested and booked into the King County Jail, police said.