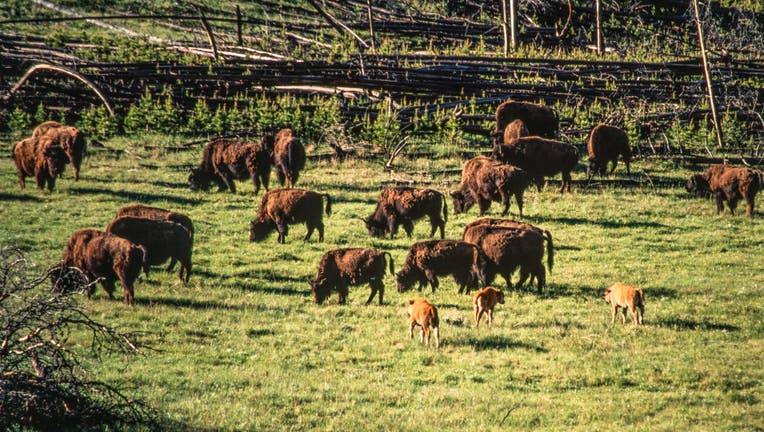 WEST YELLOWSTONE, Mont. (AP) - Thirteen bison were killed or had to be euthanized after their herd was struck by a semi-truck involved in an accident with two other vehicles on a dark Montana highway just outside Yellowstone National Park, authorities said Friday.

The semi-truck struck the bison after dark on Wednesday night. Some bison were killed in the crash, and others were put down due to the severity of their injuries, the West Yellowstone Police Department said in a statement.

No one in the truck or in the two other vehicles was hurt, said Police Chief Mike Gavagan.

Authorities said they were investigating the cause of the accident, which occurred at about 6:30 p.m. Wednesday on U.S. Highway 191, just north of the town of West Yellowstone. The town serves as a western entrance to Yellowstone National Park.

Police initially said all three vehicles struck the bison but later reported that only the truck did.

Speed may not have been a factor in the accident, police said, though "road conditions at the time would dictate traveling below the posted speed limit."

Bison in the region often congregate near roadways in the winter, where it's easier for them to navigate amid heavy snow, the police department said. The animals can be hard to see at night because of their dark brown color and because their eyes don't reflect light, including headlights, like deers' eyes do, it said.

"We deal with wildlife being struck and killed on the roadways in our area on a regular basis due to the abundance of wildlife in our area and our close proximity to Yellowstone National Park," the police statement said.

"We are always saddened by any of these incidents, particularly when so many animals are lost."