Authorities are investigating a deadly shooting in Pierce County late Saturday night, which left one person dead and three injured.

MIDLAND, Wash. - Neighbors are frightened after four people were shot in a Midland apartment complex overnight.

Two of the victims were found just a few miles away in Tacoma and one of them died.

Pierce County Sheriff's officials said they are still looking for suspects in the incident. They're asking if anyone has surveillance footage from the following route, to contact deputies: 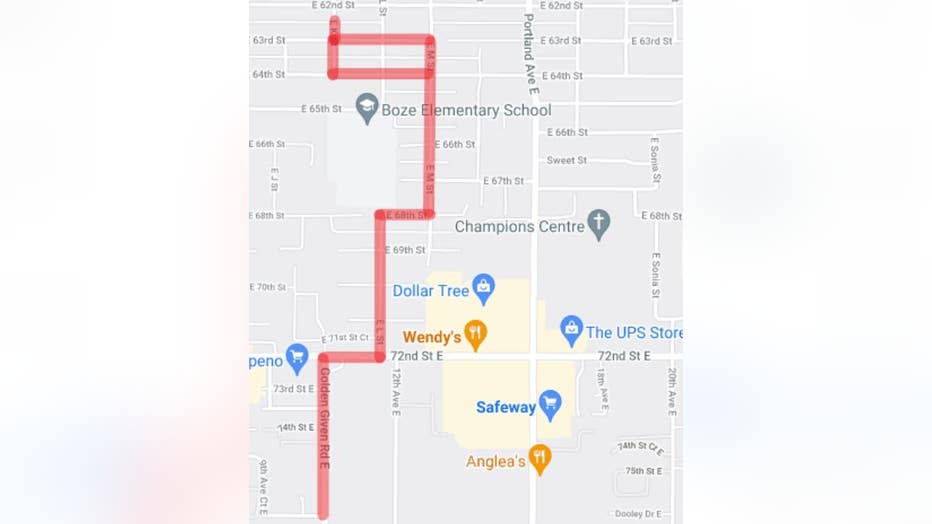 They are also looking for a vehicle associated with the homicide. Two suspects were seen getting into a white or light-colored 4-door sedan with black wheels. The vehicle was making sputtering noises.

People who live in the apartment complex said they are shaken up after a barrage of bullets were fired not far from their units.

After this deadly shooting, they want more patrols.

"I come out to grab something from my car and that's when I heard all the gunshots," a neighbor told FOX 13 News.

It was a startling sound.

"It was like 6 to 10 shots and then 10 seconds later, maybe, one guy starts asking for help," the neighbor, who did not want to be identified, said. "I could hear it, but I didn't want to approach, you know, after so many gunshots."

He lives at the apartment complex near 76th Street East and Golden Given Road East in Midland and said the deadly shooting overnight makes his family and his neighbors feel unsafe in their own home.

"This is kind of a rough neighborhood, but it doesn't matter how many times you call the cops. It really has to be something terrible for them to show up," he said.

It was just after 11 p.m. Saturday when Pierce County deputies said four people were shot.

A neighbor at that scene shared Ring video with us showing police scouring the scene and a pickup truck parked in front of a church with the doors wide open.

She said the incident makes her want to move.

The three who survived have serious injuries, according to officials.

They said several of the victims are family members.

For neighbors, this incident only highlights what they said is an ongoing problem that is putting their families at risk.

"It's hard. It's hard, I mean, but what can you do? I cannot afford to go somewhere else. That's why I'm still here," the neighbor said.

That's why they're asking for a bigger law enforcement presence with every hope that it could stop this from happening again.

"Just come around from time to time, just drive by, and maybe the people will see they are coming by and they stop coming and doing donuts back there or drink, they grab the gun and start shooting up in the air," the neighbor said.

Investigators said they aren't sure what led up to the shooting.

They said it's not clear why two of the victims ended up in Tacoma.

Deputies said right now, they have not identified or arrested any suspects, but they are asking anyone with information to call the Pierce County Sheriff's Office at 253-798-7530.