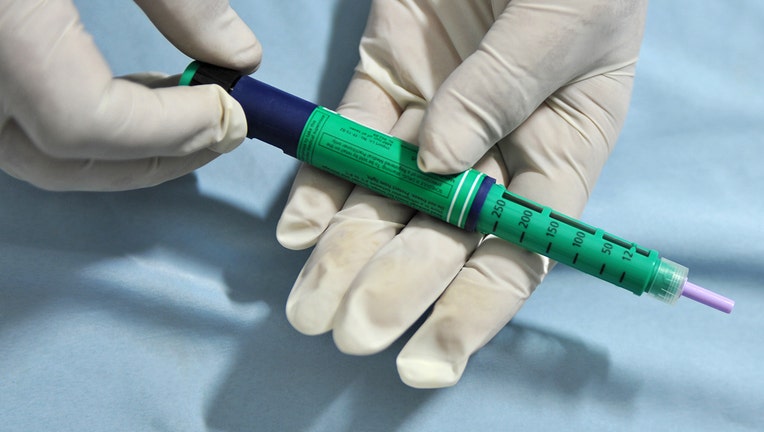 A medical assistant holds an insulin pen administered to diabetes patients at a private clinic in New Delhi on November 8, 2011. India is facing a twin epidemic of diabetes and high blood pressure, doctors have warned, after the results of a countryw

CAMBRIDGE, Mass. - A new study reveals insulin users may be doing risky things with their supplies due to current economic conditions.

The study, published on Oct. 18 in the journal Annals of Internal Medicine, found that more than one million Americans feel the need to stretch their diabetes supplies due to the high costs and lack of access to the medication.

David Himmelstein, a researcher of the study, told FOX Television Stations he is "greatly alarmed" by their findings.

"More than one million Americans are needlessly forced to risk their lives because they cannot afford a vital medication," Himmelstein said. "As a result, some will undoubtedly die in the short term, and many more will eventually become blind, or suffer kidney failure, amputations or heart attacks."

Researchers in the study said the link remained after adjusting for traditional diabetes risk factors.

They found about 1.3 million Americans rationed insulin — or about 16.5% of all people who use insulin — in the United States in the past year.

Rationing was highest among those who had type 1 diabetes, those without health insurance and diabetics with high private insurance costs.

"Our nation needs to prioritize patients' health over drug companies' and insurers' profits, and assure that every American can get the health care they need," Himmelstein continued. "That's already a reality in every other wealthy nation."

Other groups including middle-income people and Black Americans were also more likely to ration insulin than their counterparts.

Researchers pointed to several factors underlying their findings including the cost of insulin prices in the U.S., which they say are far higher than in other nations.

"By limiting insulin copays to $35 per month under Medicare, the 2022 Inflation Reduction Act may improve insulin access for seniors, who experienced substantial rationing in our study," they wrote. "However, a similar cap for the privately insured was removed from the bill, and copay caps do not aid the uninsured. Further reform could improve access to insulin for all Americans."

Insulin, a diabetes medication that over 6 million Americans, take has made headlines in recent years for its skyrocketing prices.

In another study published earlier this year, Yale researchers found 14% of people who use insulin in the U.S face "catastrophic" levels of spending on insulin, meaning they spent at least 40% of their post-subsistence income — what is available after paying for food and housing — on insulin.

The findings were published July 5 in Health Affairs.

According to the Centers for Disease Control and Prevention, diabetes is a chronic health condition that affects how your body turns food into energy. When your blood sugar goes up, it signals your pancreas to release insulin. Insulin acts like a key to let the blood sugar into your body’s cells for use as energy.

With diabetes, your body doesn’t make enough insulin or can’t use it as well as it should. When there isn’t enough insulin or cells stop responding to insulin, too much blood sugar stays in your bloodstream. Over time, that can cause serious health problems, such as heart disease, vision loss and kidney disease.